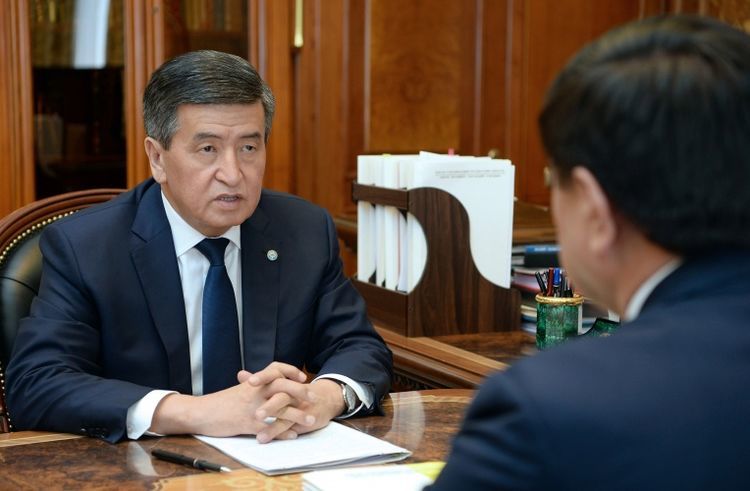 President of Kyrgyzstan Sooronbai Jeenbekov met with the Prime Minister Mukhammedkaly Abylgaziev. Press service of the head of state reported.

They discussed the results and measures for further social and economic development of the country, execution of the budget revenues for the first half of 2019, possible terms and amounts of increases in pensions and wages of social workers.

The head of state stressed that with the completion of the regular session of the Parliament, the Government should pay special attention to the implementation of the adopted laws.

The President also stressed the need to accelerate the adoption of measures for regional development, digitalization of state bodies, including fiscalization of tax procedures and introduction of Tunduk electronic interagency cooperation system, implementation of the second phase of Safe City project.

A weak coordination and lack of control over the implementation of the decisions of the Security Council on digitalization and subsoil use issues were mentioned.

The head of state stressed the importance of coordination of ministries and departments on the implementation of agreements with the Russian, Chinese, Indian and German parties, reached at the level of heads of state.

The need to compile a list of large investment projects to be launched until the end of 2019 was outlined.

In addition, it was ordered to strengthen control over the construction of roads in district centers of the regions and highways of the republic, such as North — South, Bishkek — Kara-Balta, Osh — Batken —Isfana — Khudzhant and others.

President Sooronbai Jeenbekov stressed the need to fulfill the planned revenues to the republican budget and to strengthen control over the expenditures of the state treasury.

The heads of state bodies responsible for incomplete execution of the revenue part of the treasury should bear personal responsibility.

The Prime Minister Mukhammedkaly Abylgaziev said that the Parliament supported almost the entire package of legislative initiatives of the Government aimed at implementation of economic projects and social and economic development in general.

The Prime Minister said that the implementation of all areas voiced by the President Sooronbai Jeenbekov would be taken under tight control.