Giorgi Sanikidze would like to change attitude towards women in Kyrgyzstan 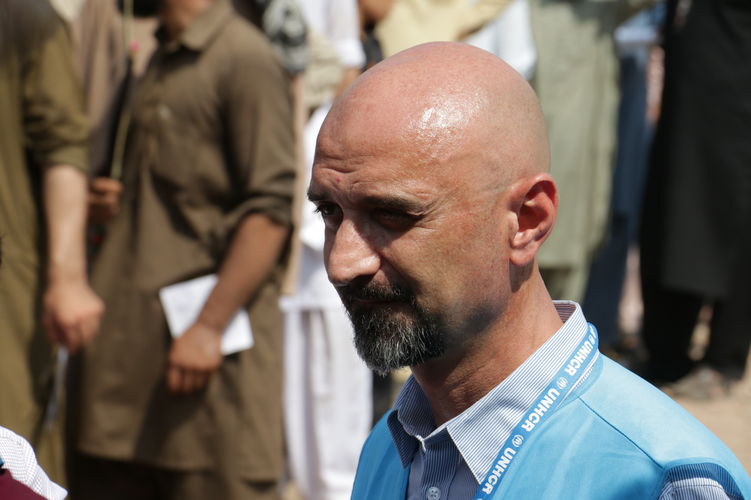 Giorgi Sanikidze came from Georgia. He was born in the 1970s, in the age of rock music, hippies, promotion of freedoms and human rights, but, in his opinion, he missed all of that because was born in the Soviet Union where all of these were ‘products of rotten western capitalism.’

During his study at the State University of Tbilisi, Giorgi Sanikidze began working part-time for the United Nations World Food Programme. In 1997, he moved to the UNHCR.

In the beginning, Giorgi was doing logistics and programme. Later he «tasted» emergency response operations during the influx of Internally Displaced Persons from Abkhazia in 1998 and influx of Chechen refugees in 1999.

He told that he liked eating out. «South East Asian and Mediterranean cousins are my favorite,» Giorgi Sanikidze said. He loves music (Pink Floyd, Deep Purple, White Stripes, Kreator. Hard rock of 70s and heavy metal are his favorite) and cinematography, especially European, Scandinavian, Japanese and Iranian films. Giorgi is now learning how to play electric guitar and make his own music with software applications.

-What do you do, when did you come to Kyrgyzstan and why?

— I have been working for the UN Refugee Agency since 20 years now and have served in over 15 countries in Africa, Middle East, Asia and Europe. I came to Kyrgyzstan back in August 2017 as a senior advisor to help our office in transition.

Besides the general management, I deal with protection of refugees, asylum-seekers and stateless people; NGO and government relations; designing projects and programmes.

-I am positively surprised to see that people in Bishkek, especially young people, are well aware of the world politics, take interest in the global affairs, they are happy to discuss and debate... those who can afford they like to travel and it seems that my home country, Georgia is a very popular destination here.

What also surprised me in Bishkek is that there are many Soviet symbols and artifacts still left in the public display.

I was surprised to see the Lenin’s statue in the very center of Bishkek.

-I am from Georgia and Kyrgyz people know Georgians quite well, both nations and cultures have many things in common. What reminds me of my home town Tbilisi? Mountains, friendly hospitable people, love and passion for food, music and spending quality time with friends and family. On a negative side, traffic and manner of driving in Bishkek remind me of the traffic in Tbilisi.

-What do you miss in Bishkek?

-I am comfortable in Bishkek, I enjoy my work and life here, but if you insist on this question then.... Well, I miss proper and authentic Georgian, Thai and Vietnamese food... not that there are many Thai and Vietnamese restaurants in Tbilisi either, but as I lived in Europe and Asia for a while I got used to them and love it.

I miss decent public transport too; good internet connection; English TV news channels such as BBC World... though I am quite happy without all of these here anyway.

-Do you have a favorite place in Bishkek?

I love parks and I walk quite a lot.

— I like all of them, I put my earphones on, full volume music and I walk the parks — that’s my best pastime. I also like good wine and food, hanging out with friends. We often get together at the cafes in Bishkek... there are many and I can’t really single out just one... depends on the mood and company.

-I can stop eating boorsok. I eat it instead of bread, with sour cream, siuzma, with mustard, with ketchup... morning, afternoon and evening. I can’t say no to nice shorpo, plov... and can’t miss out on a manti treat. Even just talking about this food makes me hungry, even though I just ate couple of hours ago.

— I don’t think I am afraid of trying anything. Quite on the contrary, I am curious to try everything. I tried and sometimes eat horse meat, I am not a big fan of it but it’s fine. I tried kumyz, don’t like it but can understand the appeal... oh, and I gave a chance to tan and shoro... can do it only once in a while though.

-Hospitality and respect for a guest. People are curious and ask questions about other cultures, they like discovering similarities between their and other cultures and when they find one they are very happy about it. Children are the cult here, they do everything and anything for them... sometimes I even think that children here a bit too spoiled they, are so much admired, almost worshiped.

Kyrgyz value friendships and family like in my country and I respect that a lot.

-While I understand that Kyrgyzstan has an old and traditional culture, I think we all have to ‘upgrade’ our cultures in the 21st century and treat women differently, with respect, dignity and as equal.

Sometimes I hear stories in the news, on social media or even see it on the streets that breaks my heart.

I am disappointed that corruption, nepotism, cronyism, brutality by the law enforcement is still widespread.

I also come from the former Soviet country and I think for once and for all we need to get rid of that legacy and move on, build a new, modern, free and fair nation where the state and the government serve people, each and individual citizen.

link: https://24.kg/english/92144/
views: 1362
Print
Related
Valerian Sibille doesn't like Kyrgyz language, but wants to return to Kyrgyzstan
Striker of Alga Tosin Aleriwa about football, plov and stupid people
Georgia opens land border for foreigners, including from Kyrgyzstan
Choreographer from Cuba Michael Campos: Kyrgyzstan is special
Eraj Kaniev from Gorno-Badakhshan finds his home away from home in Kyrgyzstan
Mary Bernadette Condé became Kyrgyz kelin, but still not used to local customs
Ambassador of India to Kyrgyzstan: I would like to see more libraries in Bishkek
Makiko Uehara and Aya Murakami: Japanese and Kyrgyz are similar in appearance
Representative of Saakashvili's Office of Simple Solutions meets with deputies
Kübra Erbayrakçı from Turkey about wonderful aspects of Kyrgyz language
Popular