Dzholdoshbek Dzhunushev was appointed General Director of the State Enterprise Kyrgyzkomur. Press service of the State Committee for Industry, Energy and Subsoil Use reported.

According to its information, the new head was introduced to the staff by the Chairman of the State Committee for Industry, Energy and Subsoil Use of the Kyrgyz Republic Ulanbek Ryskulov and the Deputy Chairman Azis Saparaliyev. 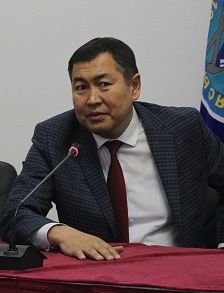 Ulanbek Ryskulov assigned to the employees of the State Enterprise Kyrgyzkomur the tasks for the effective operation of the enterprise on the uninterrupted supply of coal to the population and preparation for the autumn-winter heating season 2018/2019.

Recall, the Director of SE Kyrgyzkomur Myrza Dzhamanbaev was relieved of his position due to shortcomings in the work for the preparation for the autumn-winter heating season 2017/2018.

Dzholdoshbek Dzhunushev was born on June 22, 1972. In 1997, he began his career as an inspector of the State Tax Inspectorate for Pervomaisky district of Bishkek.