President of Kyrgyzstan meets with Prime Ministers of EEU countries 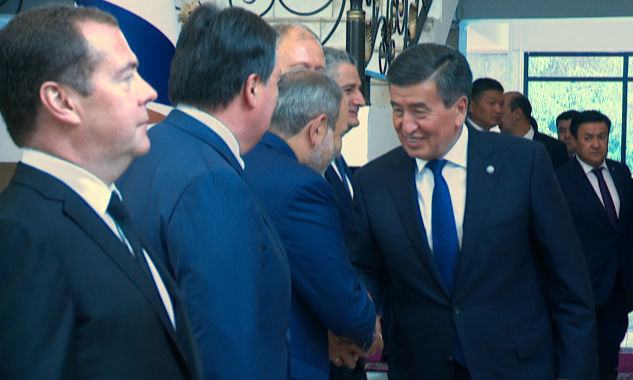 President of Kyrgyzstan Sooronbai Jeenbekov met with heads of delegation of the Eurasian Intergovernmental Council. The Information Policy Department of the Presidential Administration reported.

«During this time, the EEU has become a strong and effective integration association. Measures are jointly being taken to implement the freedom of movement of goods, services, capital and labor. The volume of mutual and foreign trade is gradually increasing. In 2018, GDP growth in the union as a whole amounted to 2.5 percent,» said Sooronbai Jeenbekov.

He stressed that the international activity of EEU has become attractive on the world stage. Trade and economic relations and the geographical map of cooperation are expanding. Agreements have been signed with China and Iran. Free trade zone with Vietnam effectively operates. Active negotiations are underway with Israel, Singapore, Serbia, India and Egypt. Memoranda of cooperation were signed with a number of major regional associations.

«It is important to continue expanding the list of countries with which we simplify mutual trade procedures. It is also necessary to direct our efforts to the implementation of infrastructure projects. For example, the sphere of railway transport is of great interest for Kyrgyzstan. Joint projects in this direction will bring us all good economic dividends, which will increase the interest of other Central Asian countries in our integration association,» the President of Kyrgyzstan stressed.

Sooronbai Jeenbekov noted that the implementation of the agreement on the labeling of goods of the Union has already proved its effectiveness in combating smuggling and gray imports. It is necessary to continue this work and take into account the capabilities of EEU states, as well as the readiness of small and medium-sized businesses. Functioning of the internal market of the union, namely the freedom of movement of goods, is also important.

In addition, the head of state drew attention to the need to empower the Eurasian Economic Commission (EEC) to effectively remove obstacles in the domestic market of the union.

Sooronbai Jeenbekov noted that the agenda of the meeting of the Eurasian Intergovernmental Council was rich and relevant.

The Prime Minister of Russia Dmitry Medvedev, speaking on behalf of EEU Heads of Government, expressed gratitude for the invitation, organization and holding of the meeting of the Intergovernmental Council on the shore of Issyk-Kul lake.

«You have mentioned the five years of the existence of EEU, during which we really achieved certain successes. Administrative barriers are reduced, barriers to doing business and communication of people are disappearing. Union countries are already acting in the global competitive field as an integral whole. And the most important, contacts between people, companies, enterprises, public organizations that are part of our union are trustful,» said Dmitry Medvedev.