The head of the Government’s Office Baktybek Amanbaev introduced acting Mayor of Bishkek Balbak Tulobaev to the staff of the Bishkek City Hall and heads of city services. 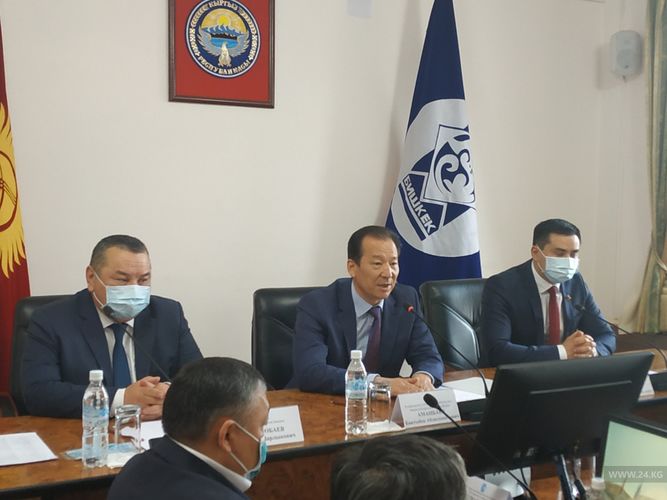 He read out the order of the Prime Minister Sadyr Japarov on his appointment to the post of acting mayor until election of a new head of the City Hall.

«First of all, the task is to prepare for winter. The City Hall should also work on prevention of the second wave of COVID-19. We believe that you know this work, you know the problems of the city,» he said.

The Speaker of the Bishkek City Council, Zhanybek Abirov, added that Balbak Tulobaev faced another task — formation of a draft budget for 2021.

I ask everyone to calm down. I think we will move on with the team and the townspeople, we will talk about the rest, and I think everything will be fine.

Balbak Tulobaev left the post of the Plenipotentiary Representative of the Government in Issyk-Kul region yesterday. Prior to that, he headed the Executive Office of the Bishkek City Hall.

Aziz Surakmatov resigned. Prior to that, he appointed ex-mayor of Bishkek Nariman Tyuleev to the post of the First Vice Mayor. By law, he should serve as mayor until the election of a new one.

The acting President, Prime Minister Sadyr Japarov accepted resignation of mayor of Bishkek Aziz Surakmatov. The post of the head of the capital is still vacant. However, unknown persons, allegedly Sadyr Japarov’s supporters, claim the post. Some Torokhan Zhunusbekov is among them.

The mayor of Bishkek is elected by the City Council. Faction and majority coalition as well as the prime minister can nominate candidates.