Prime Minister of Kyrgyzstan meets with residents of Maksat village 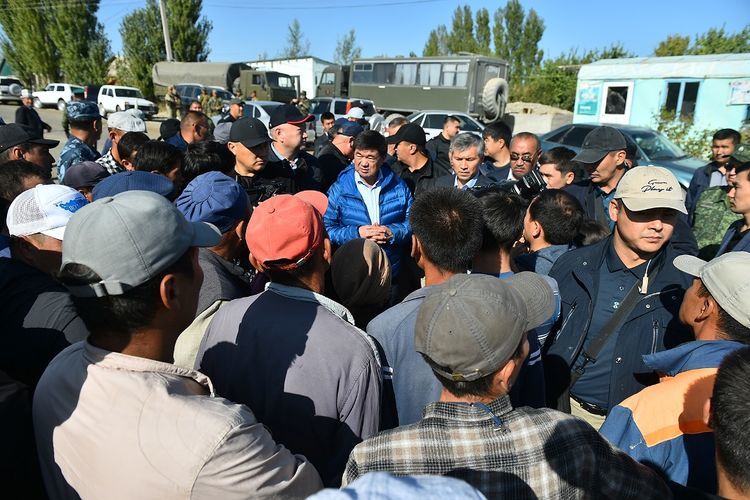 Prime Minister of Kyrgyzstan Mukhammedkaly Abylgaziev met with residents of Maksat village in Batken region, where a border conflict occurred the day before. The Information Support Department of the Government’s Office reported.

The Head of the Cabinet of Ministers stressed that settlement of border issues and support of residents of border villages were a priority for the state, they are under special control.

You live in difficult conditions, daily dealing with border problems, at times arising complex conflict situations. I am grateful to you for your perseverance, courage, fortitude and patience, for your patriotism.

The Prime Minister added that solution of border issues was not a one-way process. He promised that the Government would step up work on delimitation and demarcation in order to coordinate all disputed areas as soon as possible and achieve the most positive developments on this issue.

«We will direct all our efforts to solving border problems taking into account national interests. It must be admitted that such issues require deeply thought-out measures, a balanced approach and time. They should be resolved only in a constructive manner, in conditions of mutual trust and mutual consideration of interests,» said Mukhammedkaly Abylgaziev.

He also visited Maksat border post and talked to personnel. The Head of Government expressed his condolences to the relatives and colleagues of the soldier of the special forces unit Boru of the State Border Service of the Kyrgyz Republic, Ravshan Muminov, who died in the line of duty.

«Unfortunately, it happened that our soldier died in peacetime, others were injured. All necessary assistance will be provided to all the victims,» said Mukhammedkaliy Abylgaziev.

He also held a meeting with the heads of units of the State Border Service, at which he stressed the need to resolve the conflict, relieve tension in the border areas, as well as to ensure withdrawal of security forces. In this regard, the parties will hold negotiations between the authorized delegations of the two countries.

The Prime Minister also visited the school named after A. Momunov in Eskoochu village, where residents were evacuated from the conflict zone, and told them about the measures taken to resolve the issue of their return home.

Recall, a shootout occurred the day before on the Kyrgyz-Tajik border in Leilek district. According to the State Border Service of Kyrgyzstan, the Tajik side was the first who used weapons, firing at the Kyrgyz border post Maksat, and then the temporary border post Sai in Leilek district of Batken region. According to the Ministry of Health, 13 Kyrgyzstanis were injured. The Tajik side reports about 12 hospitalized citizens.