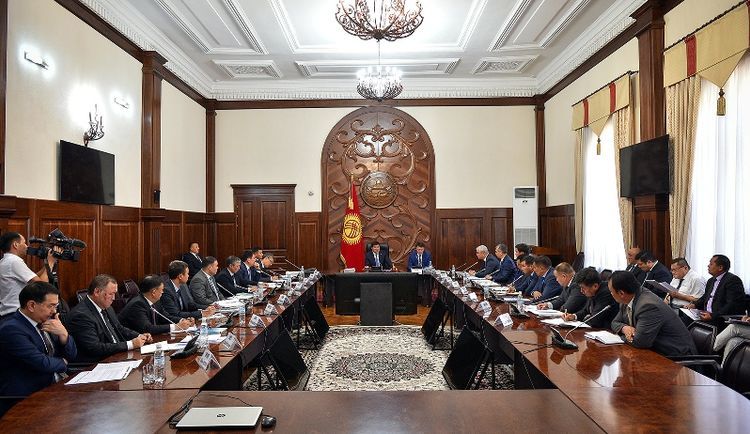 Prime Minister of Kyrgyzstan Mukhammedkaly Abylgaziev held a meeting with Plenipotentiary Representatives of the Government in the regions of Kyrgyzstan and demanded to step up work on development of regions. The Information Support Department of the Cabinet reported.

The Prime Minister drew attention of heads of the regions to the importance of strengthening efforts on attraction of investments, launch of new industries, creation of jobs, solution of social issues, development of irrigation and providing the population with clean drinking water.

We see that plenipotentiary representatives often do not properly fulfill their duties, do not show initiative, and do not conduct outreach work among the population.

«Often, our citizens in the regions are left without due attention from local authorities in solving urgent problems. In some cases, there is no interaction between the authorized representatives, mayors, heads of districts. This should not be,» he said.

«Who should raise the most pressing problems of the regions? There is no need to wait until they point to these problems. You have all the authority. The government is implementing a set of measures to develop the regions: in recent years, a record number of social facilities have been built and are under construction, infrastructure projects are being implemented, significant funds are allocated for soft loans, and production facilities are launched. And your initiatives are of great importance in this large-scale work,» said the head of the Cabinet.

He stressed the importance of effective interaction between authorized representatives of the Government and financial institutions, such as the Russian-Kyrgyz Development Fund, Guarantee Fund OJSC, Aiyl Bank OJSC and RSK Bank OJSC.

Mukhammedkaly Abylgaziev instructed to intensify the work on promoting the bill aimed at strengthening the powers of heads of districts and strengthen awareness-raising activities among citizens.