Ask and not use: How Kyrgyzstan’s authorities build relations with donors

It is an open secret that Kyrgyzstan depends on external assistance. Over the years of independence, the country has received more than $ 10 billion from donors. Almost a third of this amount was provided on a non-repayable basis in the form of grants.

Medical products and equipment are brought to the republic; domestic projects are sponsored. Moreover, most often this support is targeted, at the request of the state itself.

It would seem, use it and be happy. But the paradox is that the authorities gratefully accept the help, and they are often in no hurry to use what they have received, leaving donors in bewilderment and doubts about whether this support was needed at all.

Last year, Soros-Foundation Kyrgyzstan supported the request of the Main Traffic Safety Department for creation of a system for online registration of traffic accidents in Bishkek, but under the condition that the data will be publicly available. This will allow analyzing the possible causes of traffic accidents and control possible interventions.

As the head of the Foundation Shamil Ibragimov told 24.kg news agency, in January 2021, the management of the Main Traffic Safety Department asked to expand the project. «A memorandum has been signed — the foundation finances the system and special trainings for personnel, and the Main Traffic Safety Department uses the system and publishes open data on all traffic accidents in the republic. The platform for recording the traffic accidents themselves has been available since January at the capital level. The project was officially presented and launched at the country level on June 22,» he said.

The system that cost $ 25,000 is inactive. Two months have passed, but the data are still not generated or published.

«According to the agreements, 102.kg website should contain all information on traffic accidents with the ability to download data sets and open API access to data. But, as we can see, only 16 traffic accidents were registered from August 1 to September 3, 2021,» the head of the Soros-Foundation Kyrgyzstan says.

It is to no purpose to work with government agencies on such projects. They are not fulfilling their obligations. This is not a single case, there have already been similar ones.

Another example are mobile clinics donated to Kyrgyzstan by the Islamic Development Bank. Eight specialized vehicles were handed over to the Ministry of Health as far back as on May 5.

They have all been idle on the parking lot in Asanbai microdistrict for the fifth month.

Initially, the vehicles were planned to be distributed among regions to improve access to medical services for residents of remote areas. But then it was decided that they would first start working in Chui region. 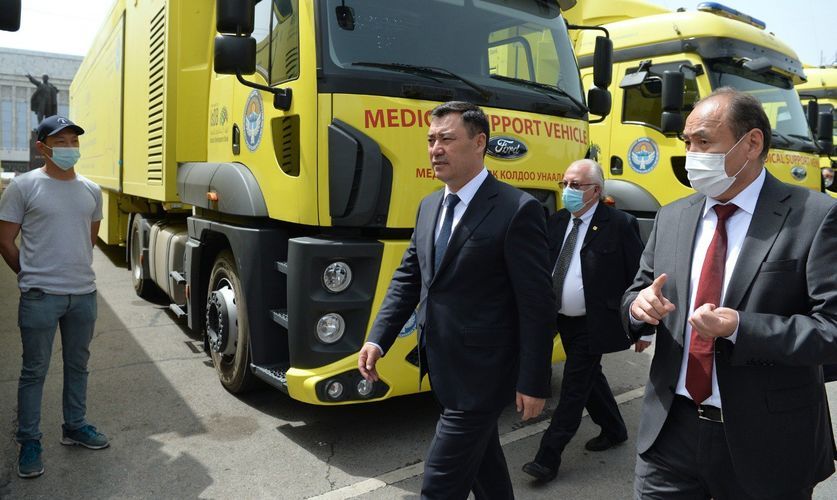 At the end of May, the Minister of Health Alymkadyr Beishenaliev said that start of their work was postponed due to bureaucratic procedures.

«The vehicles had to be insured, this is done. In addition, they must pass registration, but for this it is necessary to register the Islamic Development Bank as their owner, but there is no office of the bank in the country, so the procedure is delayed. The mobile clinics cannot leave without state number plates,» he said.

On August 27, the Ministry of Health said that the vehicles were still not used, because the responsible persons continue to check the quality and reliability of the equipment.

Meanwhile, one complex of the mobile clinic includes a computed tomography and mammography machines, which are so needed in remote regions, an operating unit, an X-ray unit, a gastroscope, a mobile screening center, as well as doctors’ rooms, a laboratory for conducting tests and even minibuses for transporting patients, including a class C ambulance.

At the end of August, journalists conducted an investigation and found out that more than half of the goods for the fight against coronavirus that have been delivered to the country from Germany and Turkey remained in warehouses, and 20,000 PCR test kits from Russia were not handed over to the laboratories.

The ventilators and oxygen concentrators have already been sent to hospitals.

But some of the PPE is still at the warehouses of the Ministry of Health. Test kits have not been handed over to laboratories either. Only a half of the humanitarian aid package provided by Germany in November was distributed.

The Ministry of Health explained that the test kits are stored at a warehouse since they do not have the necessary reagents. However, according to the Foreign Ministry, Russia had nevertheless donated reagents to Kyrgyzstan for 20,000 tests in January.

Last year, the Islamic Development Bank allocated a $ 15 million loan to Kyrgyzstan for the purchase of respirators, 30 cars and construction of ten laboratories.

Only 15 medical vehicles, which were handed over to hospitals in the regions, have been purchased at the expense of the money. However, information on the distribution of drugs and PPE is nowhere to be found. Construction of the laboratories has not begun either, and it is not known when the work will start.

These are just a few examples from recent history. All of them turned into disappointment for donors, and Kyrgyzstan can hardly count on offering a helping hand in the future.