The Parliament of Kyrgyzstan adopted a scandalous bill on protection from false and unreliable information, initiated by Gulshat Asylbaeva. The decision was made at yesterday’s meeting.

The deputies had to vote several times. 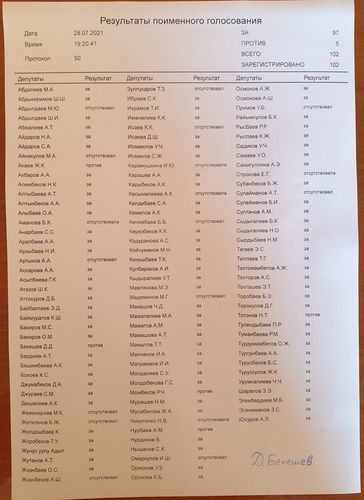 The deputies approved the resonant law on manipulating information on June 26, 2020. At least 79 members of the Parliament voted for it. Civil activists, domestic and international human rights activists demanded from the President Sooronbai Jeenbekov to veto the bill of Gulshat Asylbaeva, which threatens freedom of speech in the republic. However, under the Constitution, the head of state does not have an absolute veto right.

Jeenbekov returned the controversial law to the Parliament for revision in July. A group for overcoming the objections was formed. As a result, name of the document was changed to «protection from false and unreliable information».