Sadyrkulov won a bronze medal in the senior group. 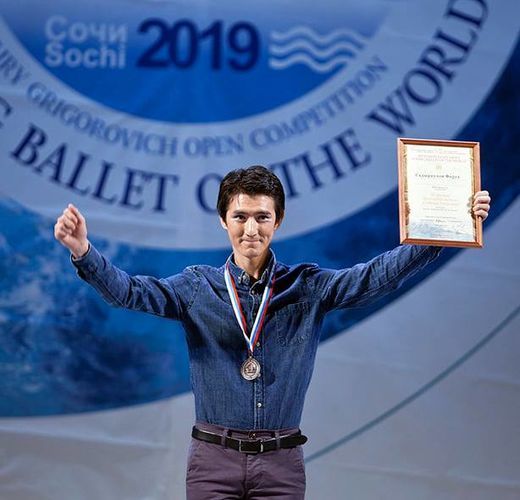 More than 50 young ballet dancers in two age groups: the youngest (up to 19 years) and the oldest (from 19 to 27) from 15 countries, including Russia, Armenia, Brazil, Serbia, Great Britain, Italy, Finland, Japan, became participants of the international event.

The creative leader of the competition and the chairman of the jury is the outstanding choreographer Yuri Grigorovich.

The competition is held with the aim of assisting young ballet dancers in their creative development, growth of professional skills for promotion on concert and theater stages, establishment of creative and friendly contacts among young people from different countries of the world.

69 more people contract COVID-19 for a day in Kyrgyzstan, 1,817 in total
News brief
4 June, Thursday
10:16
At least 261,173 saplings allocated for landscaping of cities in Kyrgyzstan At least 261,173 saplings allocated for landscaping of...
09:59
Heavy rains flood yards and streets in Naryn
09:42
Azattyk journalists repeatedly summoned for interrogation to SCNS
09:27
Smuggled goods for over 1 million soms detained in southern Kyrgyzstan
09:06
At least 42 children whose parents are unknown live in Kyrgyzstan
3 June, Wednesday
17:35
Another patient with COVID-19 discharged in Balykchi after recovery
17:26
Aleksey Petrushevsky to appeal decision of Bishkek City Court
16:25
Kyrgyzstan could postpone elections to Parliament due to coronavirus
16:12
Kyrgyzstan and China agree to resume work of Torugart checkpoint
16:07
Deductions from National Bank's profit to be increased to 90 percent