Dangerous nitrates found in imported watermelons and melons in Kyrgyzstan

The State Inspectorate for Veterinary and Phytosanitary Safety of Kyrgyzstan asks to tighten control over the import of watermelons and melons from Uzbekistan and Tajikistan. Official letter of the head of the inspectorate Kalys Zhumakanov to the Ministry of Agriculture says.

Check in the markets found out that the content of nitrates in imported watermelons and melons exceeded the norm. It is dangerous to human health. 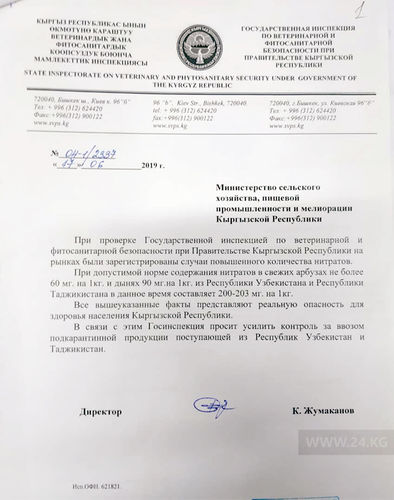 According to Erkin Kadyrov, the Head of the City Plant Quarantine Department, watermelons and melons are brought from Tajikistan through Batken region.

«We are responsible for Osh region. Watermelons and melons were not imported through Dostuk post in Kara-Suu district. Most likely, they were delivered through Batken. In the last 16 days, at least 294 tons of tomatoes, 574.7 tons of carrots, 4.7 tons of eggplants, 7.7 tons of bell pepper, 5.9 tons of chili pepper, 1.5 tons of cabbage, 21.2 tons of cucumbers, as well as 38.4 tons of apples, 480.1 tons of apricots, 199 tons of cherries, 33.5 tons of peaches, 56.8 tons of nectarines and 1.3 tons of grapes have been brought from Uzbekistan. Vegetables and fruit, which are delivered through Dostuk post, are being checked,» he stressed.