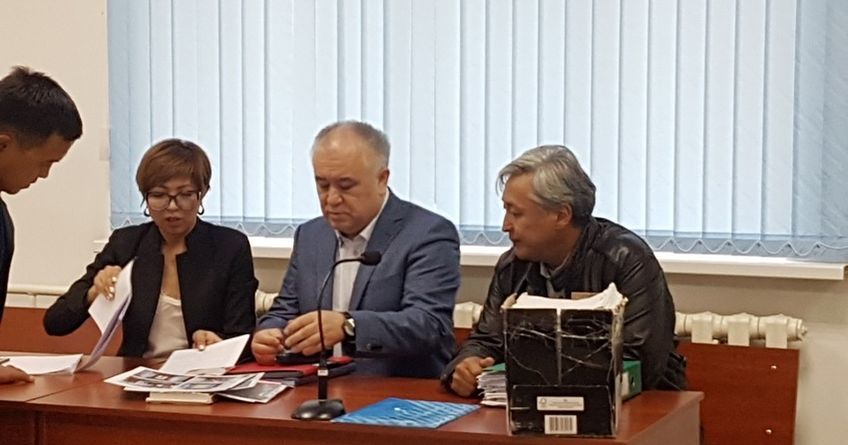 Review of a criminal case against the leader of Ata Meken party Omurbek Tekebayev and the ex-head of the Ministry of Emergency Situations of Kyrgyzstan Duishenkul Chotonov started in the Pervomaisky District Court of Bishkek. It is chaired by a judge Ainura Satarova.

The former deputy minister of internal affairs Baktybek Alymbekov was invited to the court as a witness. He held the post in 2010. The witness explained that there were riots in Osh city in May 2010, supporters of the ex-president Kurmanbek Bakiev tried to regain power and overthrow the interim government.

«On May 13, we left for Osh by the decision of a member of the interim government Ismail Isakov, there was an unstable situation. All negotiations to resolve the situation took place with the participation of Duishenkul Chotonov. He was in front of our eyes all the time, a lot of people can confirm that Duishenkul Chotonov could not be in Bishkek on May 13, 2010,» the witness said.

His testimony was confirmed by another witness and an eyewitness of those events — the former head of Osh region Mamasadyk Bakirov. He stressed that members of the Kyrgyz Republic’s interim government went to the residence from the airfield in the southern capital.

Representatives of the state prosecution asked Baktybek Alymbekov how he was able to reproduce in so much detail what had happened almost 10 years ago. «It was not just an ordinary day. Revanchists were preparing an uprising. Provocateurs inundated the south, and we could lose control there. Therefore, members of the interim government were sent there from Bishkek, including Duishenkul Chotonov,» said Baktybek Alymbekov.

Earlier, the main prosecution witnesses — Leonid Maevsky and Aleksey Modin — told that exactly on May 13 they met informally with the defendants in Supara complex and they demanded $ 1 million from them for a controlling stake in Alfa Telecom CJSC.

On August 21, the Supreme Court sent the criminal case of Omurbek Tekebayev and Duishenkul Chotonov for review due to newly discovered circumstances.

Omurbek Tekebayev and Duishenkul Chotonov were sentenced to eight years in prison with confiscation of property. Courts of all instances found them guilty of corruption. They were placed under house arrest on August 29.