Balbak Tulobaev, the chief of the staff of the Bishkek City Administration, showed how a travel card for public transport would look like.

He noted that this was a signal variant. 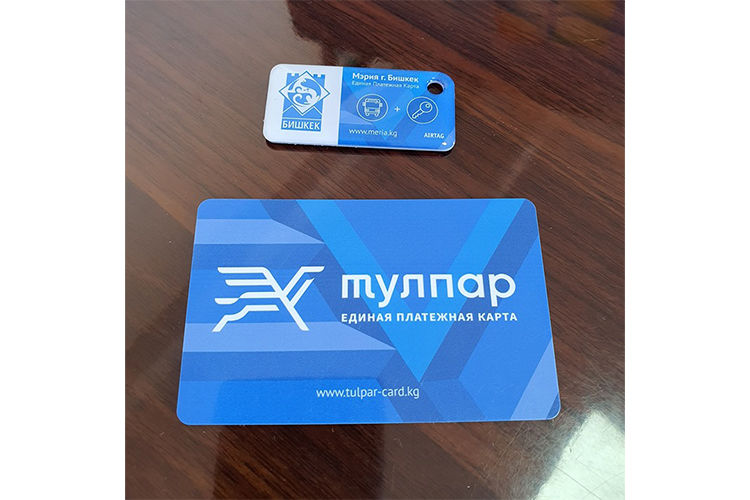 «We will launch electronic ticketing in public transport project in October, a card will be used. This is a signal variant. Inscriptions on it will be in two languages. A small one is for schoolchildren. It can be hung on a keychain not to lose it,» he said to 24.kg news agency.

According to him, first of all, the city administration will provide vulnerable segments of the population, beneficiaries with the cards, and then they will be sold.

Earlier, the city administration reported that electronic ticketing would work in a testing mode at first.

In May, the city administration of Bishkek signed an electronic ticketing agreement with BPS AG (Switzerland). The company will provide the necessary equipment for an automated system of collecting public transport fare, carry out installation and commissioning, and will service and repair the system for five years from the moment of its launch.

The company has to complete all work within 10 months.

BPC AG offered a low transaction price of 0.49 soms, free cards for beneficiary categories of the population, wide distribution and replenishment of cards through the use of bank cards of partner banks of Kyrgyzstan, low cost of validators, successful experience in implementation of similar projects in other countries.

Permissible air pollution level not exceeded in most of Bishkek districts

Man imprisoned for 2 years for sexual harassment of girl in Nooken
News brief
27 January, Monday
17:58
Foreign Ministry recommends Kyrgyzstanis not to travel to China Foreign Ministry recommends Kyrgyzstanis not to travel...
17:17
Passenger plane crashes in Afghanistan
17:00
Kyrgyzstanis win six medals at Taekwondo ITF Tournament in Moscow
16:29
Drug laboratory: Video of confiscation of 450 kg of marijuana posted
16:07
The Matraimovs withdraw material claims to 24.kg news agency
15:49
Government plans for 2020: Fiscalization and fight against shadow economy
15:31
New virus in China: All flights to China temporarily suspended
14:55
24.kg news agency has no evidence of the Matraimovs’ involvement in smuggling
14:39
Suspect of fraud arrested in Bishkek
14:16
President participates in meeting-requiem in honor of breach of Leningrad siege