The London Bullion Market Association (LBMA) has suspended Kyrgyzaltyn OJSC from the LBMA Good Delivery List. The Kyrgyz company is not included in the list of reliable suppliers that could negatively affect the activities of the refinery, the cost of gold and the investment attractiveness of Kyrgyzstan.

Nobody needs this gold

Executive Director of the International Business Council (IBC) Askar Sydykov notes that businessmen have already assumed the possibility of such a development of events. The entrepreneurs asked the authorities to calculate all the risks in advance.

«We have only one refinery in our country. If we want to manufacture the final product, then we have to refine gold there. But, using the services of the plant now, after the deprivation of the status of reliable supplier, we will not be able to sell metal on world markets,» Askar Sydykov said.

This is a big risk, because further refining will have to be sought overseas at Good Delivery factories, or sold in other markets at a large discount.

Related news
Kumtor situation: Three months of external management at the mine
The authorities practically do not comment on the decision of the LBMA. The only person who spoke out on the situation was the Minister of Economy and Finance Akylbek Japarov. He stated that everything is going according to the predictable scenario. The decision of the London Bullion Market Association was expected.

«I can say even now that there may be other obstacles and «difficulties» on their part, this is also predicted, and we take this into account,» the official explained.

He stated that Kyrgyzstan would be able to sell gold to, for example, India and China, where inclusion in Good Delivery List is not required. However, he did not say that the price would be lower. He also mentioned that the National Bank can also buy the gold.

The National Bank informed 24.kg news agency that according to the law, the Cabinet of Ministers and the National Bank of the Kyrgyz Republic have the preemptive right to purchase refined precious metals (gold). At the same time, the bank can buy precious metals of various quality standards. But, as it turned out, Kumtor’s products are not included in the list.

«The National Bank conducts transactions for the purchase of refined precious metals offered by local producers. Kumtor is not included in this list. These operations are carried out exclusively in the national currency as part of the implementation of measures provided for by the monetary policy, as well as the concept of creation and development of the market of banking precious metals in Kyrgyzstan,» the National Bank concluded.

It turns out that, in theory, the National Bank can buy gold produced by Kyrgyzaltyn’s refinery, but not at world prices.

Experts note that suspension from the Good Delivery List will hit hard both the country’s image and Kyrgyzaltyn itself. After all, earlier, all storehouses accepted ingots with Kyrgyzstan’s mark, but from now on the gold of Kyrgyzstan will not have identification marks of its place of origin.

Most likely, after purchase, it will be melted at refineries on Good Delivery List with assigning a new name.

Kyrgyzaltyn received additional profit in the form of premiums thanks to the status of ingots. Without the status, gold will have to be sold well below the world price. In addition, the refinery can simply lose its regular customers. Indeed, in addition to Kumtor, there are other mining companies in the country engaged in the development of gold deposits.

There is one more thing. Initially, the Good Delivery status was obtained specifically for the operation of the Kumtor mine. In 1994, the standard on the quality of gold was included in the general agreement between the government of Kyrgyzstan, Kyrgyzaltyn and Centerra Gold. It stated that the Dore bars mined at Kumtor can be refined only at a plant included in the Good Delivery List. 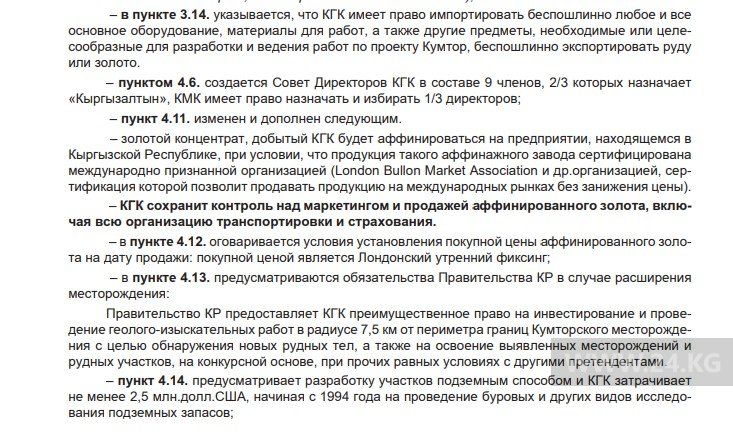 If the relationship between Kumtor Gold Company and Kyrgyzaltyn is still based on this agreement, then the gold of Kumtor also cannot be processed at the refinery. The only plant in the country may go bankrupt.

The Minister of Economy and Finance believes that there is no reason for panic. Yes, there are difficulties, but we will all live happily soon.

«Initially, we started working on new supply channels for our gold. Negotiations are already underway. I can say for now that the conditions will be no worse than the previous ones,» Akylbek Japarov promised.

The Minister of Economy and Finance also announced the launch of Electronic Som project, which will be backed by domestic gold.

«I am confident that this entire campaign will have a positive multiplier effect for Kyrgyzstan. This is not obvious for many people, but the economic situation is always improving after the introduction of sanctions. We must develop the jewelry industry, a high-quality production base, we have culture and history in this direction. If we sell our gold in form of jewelry, it will cost several times more. Everything that is happening is also an excellent reason to pay attention to high-tech production and technologies where precious metals are used,» Akylbek Japarov said.

Businessmen, however, do not share the official’s optimism. They note that it is difficult to talk about the development of the jewelry industry and creation of value chains when it is impossible to make an ingot out of the product.

«It is necessary to act in two directions now. First, Kyrgyzstan has to regain its status as a reliable supplier until November 2021. If this is not done, then Kyrgyzstan will lose the right to apply for such a status for five years. This is a serious risk. Secondly, it is necessary to think about the legal framework. The tax rate on the export of precious metal ores outside the country was raised last year. This was done for the development of domestic enterprises. But in today’s conditions, such a tax burden will lead to the fact that it will be costly to mine and process Kyrgyz gold,» Askar Sydykov believes.

The head of the IBC also noted that the current situation would affect the investment attractiveness of the country. Investors, taking into account recent events, will then re-assess the risks and think whether it is worth coming to the Kyrgyz market.

«If the country’s main plant is excluded from the Good Delivery List, then large companies do not want to risk their reputation. It is the question of savings for medium and small companies. They see that they will not be able to sell gold at the market price or they will have to pay a higher tax when refining it outside the country. There are loses in both cases. They will think several times before starting a business here,» Askar Sydykov concluded.