Christopher Schwartz: Bishkek I fell in love with survives in micro-districts 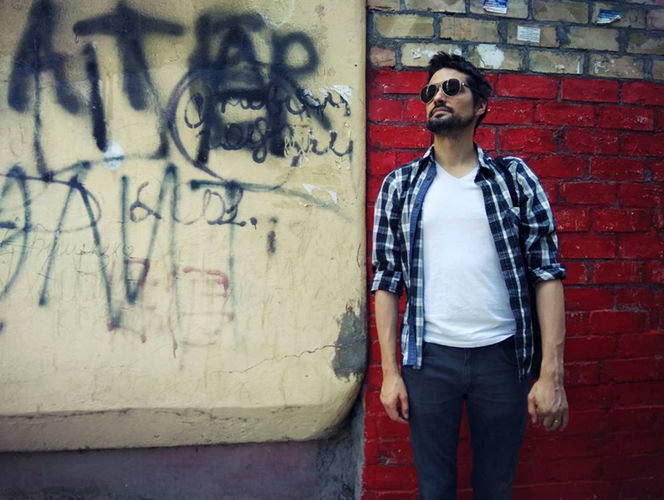 An academic researcher and journalist from the USA Christopher Schwartz first arrived in Kyrgyzstan in 2011. Since then, he divides his time between Belgium and Central Asia. He met his wife in the Kyrgyz Republic and became a professor here.

In an interview with 24.kg news agency, Christopher told about his adventures in the republic, as well as about his favorite places.

— What do you do, when did you come to Kyrgyzstan and why?

— I am an American academic researcher and journalist. I have been a professor in the Department of Journalism and Mass Communications at the American University of Central Asia, and I am now a Visiting Scholar at the Central Asian Studies Institute. I have been in Kyrgyzstan on and off since 2011. I originally came here because I was editor-in-chief of NewEurasia Citizen Media, a citizen-journalism platform in Central Asia. My wife is from Kyrgyzstan.

— Have you ever heard of Kyrgyzstan before coming here?

— Yes. I first learned about Kyrgyzstan in 2003 when I was studying at the School of Oriental and African Studies in London.

A German friend of mine from East Berlin was reading «Jamila» by Chyngyz Aitmatov and he told me all about Kyrgyzstan.

— I originally visited Kyrgyzstan twice in 2011. Although my very first visit was to Barskoon and Skazka canyon, my impressions of Kyrgyzstan were not shaped until my second visit which was completely in Bishkek.

The country was still recovering from the second revolution and I remember that Bishkek was almost completely dark during the night, very sinister, like a horror movie.

During the daytime, Bishkek was completely different — it was bright, green, alive. Back then, the city’s infrastructural condition was quite bad. However, as an American this did not disturb me, because many of our cities are also in bad condition.

In fact, Bishkek reminded me of Philadelphia, Camden and Detroit.

I even made a photo-essay for NewEurasia entitled, «Bishkek in Ruins», which celebrated the philosophical element of Bishkek’s condition.

Today, Bishkek’s character is changing rapidly. It is inevitable that cities change, and usually they will change in both good and bad ways. There is less crime, more infrastructure. At night, I sometimes feel like I am in a science fiction movie.

I know that Soviet buildings are very uncomfortable to live in, but on the outside they have a unique beauty; they should be preserved and updated.

For now, the Bishkek I fell in love with survives in the micro-districts. It is a hobby of mine to simply wander around inside the micro-districts, listening to their sounds — the water running through the aryks, children playing, couples arguing, toshoks hanging in the wind, the flickering shadows of trees and sunlight...

— What surprises you in Bishkek/ Kyrgyzstan?

I have a theory about why Bishkek is this way. When the city was Frunze, it was small but had a Soviet morality. Bishkek, however, is like its name: it is mixing all kinds of people in an angry and materialistic кumys.

Many people think Bishkek is a city «without rules», without morality. For them, this is the city of wealth, status, and power. They do not care about community, solidarity, or culture.

However, the кumys also has beautiful situations that do not exist in the West. For example, the neighborhood Kudaibergen is like something from a cyberpunk novel. There is an area dominated by auto-mechanics, but deep inside it lives a Kyrgyz shaman who performs traditional medicine on people. Incredible!

In general, in Kyrgyzstan it is more possible to encounter the Incredible than in the West. For example, several years ago I almost died from food poisoning. Roadside samsy gave me a fever of ! I was in the mountains around Karakol at night, too far away to get to a hospital.

A shaman brought me into a yurt and took care of me the entire night. He made me drink several tea pots of green tea while he prayed to Manas and the cosmos.

I was in so much pain that sometimes I felt outside my body. I thought that I was going to die, and he helped me let go of this life. Fortunately, I survived, but I will never forget him or the lesson that he taught me.

— I think the most interesting case — not really funny but very nice and illuminating — was a taxi driver: a very athletic Kyrgyz man who claimed that he was a former member of presidential security. As we talked, he gave me no reason to believe he was lying. He was a new taxi driver, very sad about his situation but nonetheless he wanted to do a good job.

Unfortunately, he somehow did not know Bishkek very well. We «explored» the city together and had a great conversation about politics and life.

— In Bishkek, mental life is centered around wealth, status, and power.

On the one hand, this is universal in our capitalistic society. On the other hand, some cities concentrate and symbolize this condition.

New York city has been physically shaped by capitalism: our mass transportation is completely centered around the financial districts of Manhattan. Bishkek is like New York in its mental landscape.

— I miss the sense of opportunity. Bishkek and Kyrgyzstan are more «raw» than the sophisticated West. My decision to study in Europe and live in Central Asia are considered «mistakes» by most American employers. Why? Because they cannot quantify my time out here, and the Americans have a saying: «time is money».

For a few years, I was able to be a professor here in Kyrgyzstan, for which I will always be grateful to this country.

— What is your favorite place in Bishkek/Kyrgyzstan?

— The southern micro-districts of Bishkek and the Dungan mosque of Karakol.

— Ashlan-fu, which I know is actually Dungan or Chinese and not «really» Central Asian. Honestly, I do not like traditional Central Asian cuisine — too many carbs, too much meat. I do really like fish and pumpkin plov, but it is extremely hard to find.

— What are you afraid even to taste?

— I have already tasted it: maksym shoro. You locals have no idea how terrifying this drink is for us Westerners!

— Honestly, except for meeting my wife who is from here, I have mostly experienced tragedy in Bishkek. I have had taxi drivers who were lawyers, accountants, economists, sportsmen.

One night, a drunk boxer wanted to fight me just because I spoke better Kyrgyz than him.

People always stare angrily at my wife and I because we are a mixed couple speaking English.

I have also experienced a lot of jealousy in Bishkek. Even some relatives hate me just because I am a «rich» foreigner. They think my life is so much easier compared to theirs.

It is very different outside of Bishkek. Rural people are more simple, more kind.

They are conservative and traditionalist, but they are also honest. They do not pretend to be liberal and modern like too many city-people do. There is more joy and solidarity outside of Bishkek.

— Absolutely, Kyrgyzstan is worth returning to. Everyone around the world, including Kyrgyzstanis themselves, believe that Kyrgyzstan is on the «edge» of history, like it is some useless, uninteresting place that has no importance to the future. I strongly disagree.

It will probably never be a famous country, but that does not matter. Kyrgyzstan is on the «frontier» of history.

It is extremely difficult to be on the frontier, especially because pioneers are almost always forgotten. But it is here that the enormous energies of history are moving, and they can be easily touched by anyone willing to see touch them. Kyrgyzstan is like an exposed live wire: it will shock you to life.