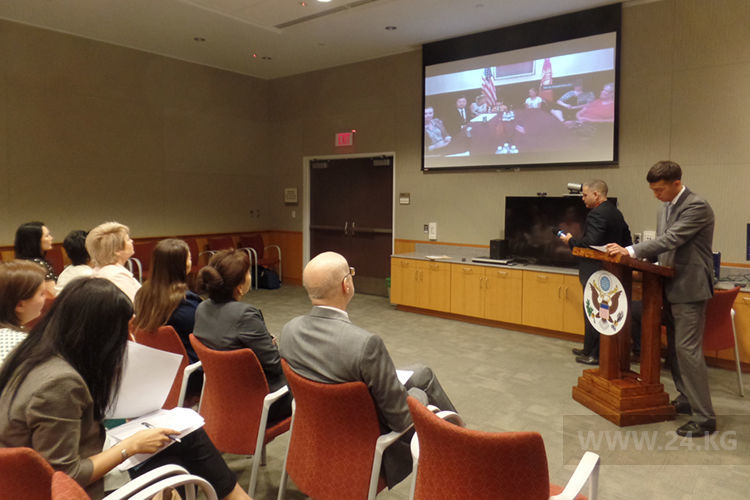 Foreigners have adopted 86 children from Kyrgyzstan since 2012. The information was voiced during a video conference with American families in which little Kyrgyzstanis live.

Everything is under strict control

Representatives of the government, deputies of the Parliament, employees of ministries and departments dealing with international adoption issues came to the Embassy of the United States of America in Bishkek.

Charge d’Affaires of the USA in the Kyrgyz Republic Alan Meltzer called the cooperation of the two countries in the field of international adoption one of the priority areas.

«An ideal option for each child, of course, is to grow up with biological parents, in the country of birth. But, unfortunately, this is not always possible. In such cases, international adoption gives them the opportunity to grow up in a stable family environment, full of love and care,» he said.

It is important for both Kyrgyz and American governments to act in the interests of the children. Health and well-being are of primary importance for the local, state and federal officials.

According to him, adopted children in the United States have the same legal protection as biological children of the American citizens.

«Every family, who wants to adopt a child, goes through an extensive check and selection process. We need to make sure of their ability to provide a safe, stable and full of love environment for the child,» he said.

The Minister of Social Development Taalaikul Isakunova noted that international adoption raises many critical issues, and holding of such video conferences, meetings with families and children allow to remove some of them.

The Ministry regularly receives reports on the adopted children.

«Many children, who underwent international adoption process, have problems with physical or mental health. And the families invest a lot of resources in order the children to be happy and to fully develop,» she said.

The Ambassador of Kyrgyzstan to the United States Kadyr Toktogulov noted that the diplomatic mission kept in touch with every family that had adopted children from Kyrgyzstan and regularly invited them to the events.

Deputy of the Parliament of Kyrgyzstan Irina Karamushkina asked families what difficulties they faced when adopting children in Kyrgyzstan.

Most of them noted that the adoption process went smoothly, delays were only at the beginning.

«At first, there were court hearings, after them we had to wait for a month for a decision. There were small errors in the documents that required correction. But, probably, it can not be done without errors,» the parents of Alex (the Charge d’Affaires asked not to voice the real names and family names to protect the private life) told.

They adopted him a year and a half ago, and recently he became an older brother.

And Eaton’s parents told that they decided to adopt the boy in 2008, but he came to America only in 2016.

«My husband and I have adopted four children, two in America, and then, in 2006, a girl from Russia. We began to study the countries in which one can adopt older children. So we learned about Kyrgyzstan. We really liked the country, the people. We ate plov every day when we were in Kyrgyzstan. But the process of adoption was not as smooth as that of the others,» they noted.

Many families mentioned waiting for a decision between all stages of the process as the most difficult.

«Children at this time already know who will become their future family, and it is difficult for them to wait,» they noted.

The Johnsons family adopted two Kyrgyz children. They noted that these were two completely different processes.

«The first one, in 2008, passed very quickly. We only visited Kyrgyzstan twice, and then returned to the USA with our daughter. As for the adoption of Oleg, the procedure was dragged out. But it was useful. We spent ten days in Kyrgyzstan, we saw each other several hours a day and communicated with him in the orphanage before we could take him to us,» the Johnsons said.

Almost all parents noted that the international adoption procedure was similar to the American one. Families fill in the same documents, undergo the same check of family history, personal data, conditions in the house, financial situation.

What will remind about the homeland

The deputy of the Parliament Natalya Nikitenko asked if there was any possibility for families to keep the children connected with the traditions and culture of Kyrgyzstan, their mother tongue, and how the embassy or deputies could help in keeping these cultural ties.

Natasha’s mom replied that social workers in the USA, with whom they had consulted on adoption, recommended buying a lot of souvenirs and things in Kyrgyzstan that would remind the girl about the country and her culture.

I have brought a lot of things to present my daughter for each birthday and Christmas, until she turns 18.

The father of Carrie responded that he found websites about Kyrgyzstan on the Internet, and during the trip to the republic, they bought books about the country. He noted that the creation of a special resource for such children could be a good help.

About 15 families participated in the video conference.

Gaps in the legislation

The deputy of the Parliament Natalya Nikitenko answered the question of 24.kg news agency about the legislation of the country regarding international adoption.

«Kyrgyzstan has gone through various stages, including scandals related to international adoption. The fact is that until 2012, there was practically no clear idea of ​​the process, the database of children, the monitoring system of their fate in the republic. After many international adoption companies got interested in Kyrgyzstan, the question of their reliability arose.

There were heated discussions about international adoption in the 5th convocation of the Parliament. They allowed to develop a new legislation jointly with the Ministry of Social Development.

«Now, I think the criteria are very strict, but the procedure is not strictly regulated. It coincides with the systems of international adoption in other countries. This is a clear and thorough inspection of the family. In addition, the system of accreditation of companies for international adoption in the Ministry of Social Development was introduced. This allows to monitor the reliability of such organizations. After it, their number in Kyrgyzstan decreased at times. At the moment, no radical changes in the legislation are required,» the deputy noted.

The Minister of Social Development Taalaikul Isakunova said that the ministry had accurate statistics on the children who had been adopted internationally since 2012. Foreign citizens have adopted 86 children, 81 of them are the Americans.

At least eight organizations have been accredited in Kyrgyzstan for international adoption: seven from the United States and one — from the Netherlands. Accreditation is issued for three years.

According to her, until 2011 the Ministry of Social Development was not an authorized body in the international adoption issues.

«Now we are doing our best to fill in the missing information, including through the embassies of Kyrgyzstan. Until 2011, the family and children’s support departments of local state administrations first dealt with adoption issues. Then they were abolished, creating the Department for the Protection of Children. The Ministry of Labor and Social Development has been dealing with this issue since 2011,» Taalaikul Isakunova told.