Atambayev: Together we can build peace on basis of dialogue, not sanctions 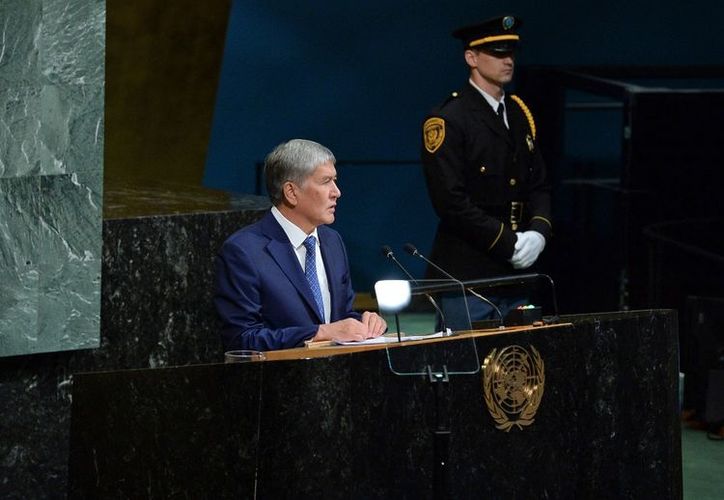 "Only together we can build a peace oriented to cultural diversity; a peace based on dialogue, not sanctions; a peace based on preventive measures and high responsibility; a world where no one will be forgotten and left behind, «Almazbek Atambayev said in his speech at the 72nd session of the UN General Assembly. Information Policy Department of the President’s Office reported.

At the beginning of the speech, the President expressed his condolences to the people of  in connection with the devastating earthquake.

«Despite the impact of the global economic and financial crisis, the fall in energy resources prices and the sanctions confrontation of world powers, the ’s GDP has been steadily growing over the past few years, while the Kyrgyz som is one of the most stable currencies among the CIS countries,» the President said.

«We started a real, systemic fight against corruption, began to purge the government from this evil, especially in the higher echelons of power. There are no more privileged circles or untouchables in the country, as it was only 6-7 years ago,» he said.

Peace, harmony and stability are the main things that we have achieved in recent years. The country is changing before our eyes. The Kyrgyz Republic is the first and only country in post-Soviet Central Asia with parliamentary democracy.

According to the president, international organizations, including the UN, recognize as one of the most free and stable states with a strong civil society on the Eurasian continent.

«A special achievement is the introduction of a new model of the electoral process using modern biometric technologies for the identification of voters and the automatic counting of votes, which has already shown its validity in the course of the 2015 parliamentary elections and the referendum in 2016,» the head of state said.

«I believe that in the near future the Kyrgyz Republic will become an economically developed, socially prosperous and secure country with a developed agro-industrial complex and industry, the country safe and favorable for living and sustainable tourism, a participant of the Mountain Partnership, taking into account the unique nature and historical and cultural monuments of the Great Silk Road, the country of healthy, educated, cultured, free and prosperous people, the country of fair and responsible government,» Almazbek Atambayev said.

The President is sure that one of the key factors of well-being in Central Asia is the mutually beneficial use of water and energy resources.

«Limited water resources will sooner or later lead to an understanding that water is an economic resource that requires reasonable use. I would like to emphasize that the issues of water use in  can and should be solved only by the states of the region through an open dialogue, taking into account the interests and needs of all parties,» he said.

Almazbek Atambayev believes that the international community should fight more actively against terrorism and extremism and related phenomena such as drug trafficking, trafficking in human beings and arms, money laundering.

Only together and only through joint efforts we can effectively counter the threat of terrorism and extremism.

« strongly condemns the violence to which the ethnic minority is subjected in  and convincingly calls upon all parties of the conflict to peacefully resolve the situation,» the head of state said.

The President added that everyone is united by the desire to preserve peace and harmony on the Earth, and for this it is necessary to ensure equal conditions and opportunities for the development of each country so that «no one was left behind», alone with his troubles and problems.