Fire broke out at Khalmion market in Khalmion village, Kadamdzhai district of Kyrgyzstan. Press service of the Ministry of Emergency Situations reported.

«The fire broke out in a container at Khalmion market at about seven o’clock in the morning. Three fire brigades were involved in its extinguishing. The fire was brought under control at 8.30, and it was completely extinguished at 9.15,» the ministry said. 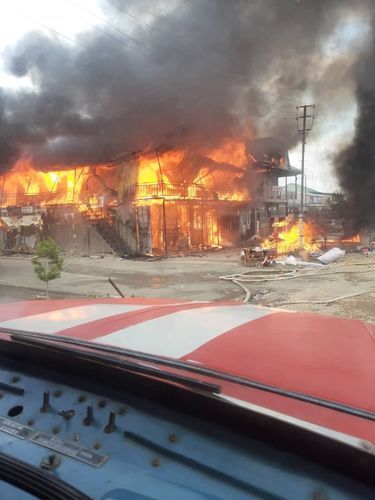 According to preliminary data, the fire destroyed 432 square meters of retail space. The cause of the fire is being found out.
link: https://24.kg/english/200965/
views: 634
Print
Related
Fire destroys two hectares of reeds and dry grass in Issyk-Kul region
House burns down due to electrical short circuit in Isfana
Fire breaks out in carpenter shop in Balykchy
Sewing workshop burns down in Voenno-Antonovka village
Large fire breaks out on pasture in Kadamdzhai district
Fire breaks out in Tashrabat shopping center in Bishkek
House and store burn down in Bishkek
Fire breaks out at Jalal-Abad airport
Bishkek landfill burning again
House completely burns down due to short circuit in Osh city
Popular