Kyrgyzstanis cannot return to homeland due to border restrictions

More than 200 citizens of Kyrgyzstan cannot cross the Russian-Kazakh border due to restrictions related to coronavirus. One of them — Nurlan Omurkanov — told 24.kg news agency.

According to him, the citizens of Kyrgyzstan are in the border zone in Orenburg Oblast of Russia. 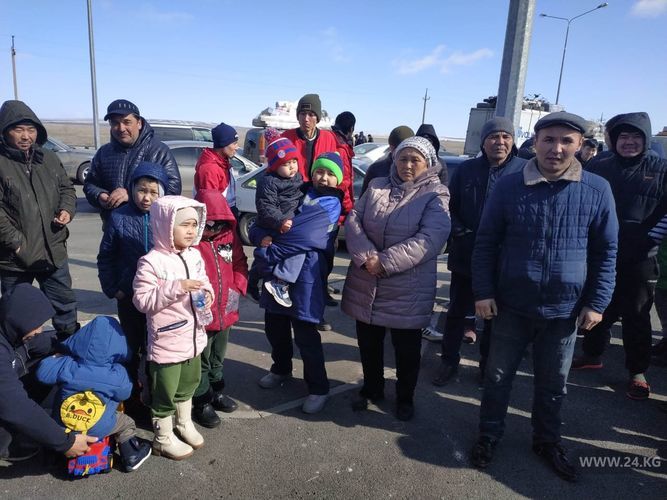 «We got stuck at Sagarchin border checkpoint. In total, there are 223 people, 87 cars. Each driver has 3-4 people in the car. Almost all cars are transit. There is no way back for us, because Russia will not let us in. Our representative went to the checkpoint, who was told that the issue with passing the people would be resolved, if the border guards received an order. Our authorities should assist with it,» Nurlan Omurkanov said.

The Kyrgyz, who got stuck at the border, learned about the restrictions after the fact or on the way.

«When we learned about the restrictions on the part of Kazakhstan, we had nowhere to return. If we had heard about them before, we would hurry up or would not leave. There are no conditions — no toilet, no store. People warm themselves in cars,» Nurlan Omurkanov told.

Recall, Kazakhstan imposed restrictions on entry into the territory of the republic as well as on departure from its territory by all means of transport due to the outbreak of coronavirus, with the exception of personnel of the diplomatic service of the Republic of Kazakhstan and foreign states, as well as members of delegations of international organizations traveling to Kazakhstan at the invitation of the Ministry of Foreign Affairs of the republic.

Citizens of Kazakhstan who are currently in Kyrgyzstan, as well as citizens of the Kyrgyz Republic who are now on the territory of Kazakhstan, can freely cross the border in order to return to their country with the document with which they left.