The former head of the State Customs Service of Kyrgyzstan, Adamkul Zhunusov, was extradited from Baku (Azerbaijan) to Bishkek. The State Service for Combating Economic Crimes informed 24.kg news agency.

The former head of the Customs Service was delivered to his homeland today by employees of the Financial Police of Kyrgyzstan. 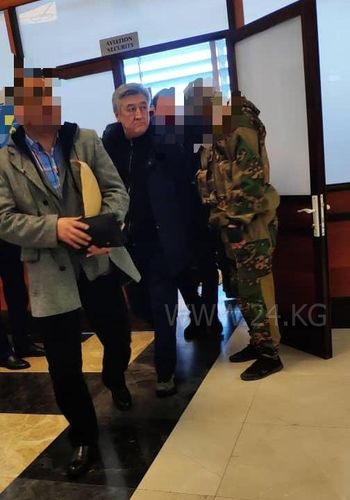 The ministry clarifies that during December, the Financial Police, the Prosecutor General’s Office and Interpol NCB in the Kyrgyz Republic carried out measures to extradite this citizen to the territory of Kyrgyzstan through appropriate channels under international treaties to which the Kyrgyz Republic was a party.

Earlier, in August 2018, Adamkul Zhunusov was accused in absentia of committing a crime under article 304 of the Criminal Code of the Kyrgyz Republic.

On August 28, 2018, the Pervomaisky District Court of Bishkek chose in absentia a preventive measure in the form of detention in respect of the former official.

According to the investigation, from 2013 to 2016, Adamkul Zhunusov, occupying the post of the Chairman of the State Customs Service, in violation of the norms of the legislation of the Kyrgyz Republic, organized a stable corruption relationship with other state bodies and a private company.

The State Service for Combating Economic Crimes notes that he, using his authority, assisted a company in obtaining permission to process the customs territory with an incorrect identification method, as a result of which the company received customs preferences on payments made to the budget of the Kyrgyz Republic, while goods imported by this company were to be registered on a general basis in Import 40 mode.

Thus, as a result of illegal actions on the part of the ex-chairman of the State Customs Service, the state suffered material damage in the amount of over 166 million soms in the form of mandatory customs payments that were not received by the state budget.