Golden Age of Nomads. How costumes of heroes were created 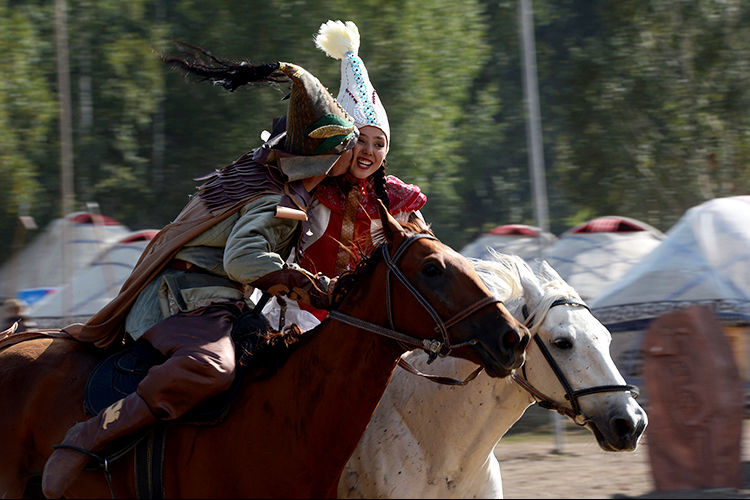 Theatrical performance Golden Age of Nomads took place during the 3rd World Nomad Games in Kyrchyn Gorge. The audience saw for the first time a large-scale reproduction of the Kyrgyz Great Power — the story line was based on the events of the 8-9 centuries, the time of the Kyrgyz Kaganate.

«First of all, we relied on the historical sources, since the basis was real characters and events that took place many centuries ago. We studied in detail the life of that time, read the descriptions of the heroes. Of course, we added our own fantasy to emphasize what temper and distinctive features this or that character possessed. Depending on this, the color and shape of the costume was changed,» she said.

We got a review of historians on each image.

Artists tried to adhere to historical match not only in the images themselves, but also in fabrics, ornaments.

We worked with natural materials only, except for some elements in the costumes of fairy-tale heroes «to create lightness.»

«Of course, there are enchanting images. They were created based not only on sources, but also on people’s perception, to make them understandable to the audience, and did not cause bewilderment,» Aisulu Koponova told.

She cited the example of Umai ene. «She is represented differently, we used all kinds of sources — legends, films. Most often, she is associated with a deer mother. And the development of costumes for historical characters was viewed with caution: each of the peoples have their own vision of heroes. Basically, these are the people with a strong character,» said the artist.

More than 30 costumes have been designed for the theatrical performance. A team led by two artists worked on them.

«We had to create a large number of outfits, to choose color solutions, to develop the details of headwear and footwear in a short period of time. Another difficulty that we had encountered were financial constraints. Therefore, we had to reduce something somewhere, replace it with other materials,» she said.

The artist stressed that the actors’ costumes were intended for stage, they are not historical, which would then find a place in a museum. Therefore, an unsophisticated viewer will not notice changes, but they will cope with their main task — to convey the image.

«Of course, we tried to use the natural fabrics, leather for the main characters. The outfits of the entourage are a bit simpler — made of cheaper materials,» she said.

The artists paid much attention to the decoration and ornaments — they tried to give them an effect of antiquity, in order they not to look like a new.

All the costumes, shoes, headwear were made to order, adjusting to the size of the actors. Aisulu Koponova admits that many masters, having learned that the outfits were intended for a theatrical performance at the World Nomad Games, made discounts and even offered their ideas for creating a more vivid image.