Helicopter crash. Why military chiefs hush up the accident 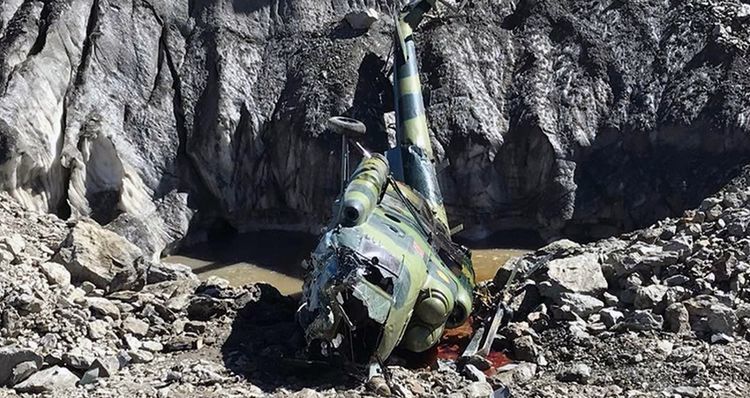 Two weeks have passed since the helicopter crashed in the mountains of Kyrgyzstan. The Military Prosecutor’s Office opened a criminal case on the fact.

The General Staff of the Armed Forces must conduct an internal investigation. Any aviation incident, as a rule, entails at least temporary, but dismissal from office of the officials, responsible for the safety of the flights. However, in our case, all officials still take their posts.

24.kg news agency decided to find out why no one had been punished so far and whether the insurance covers the cost of the combat aircraft.

Riddle wrapped up in an enigma

The Information Support Department of the General Staff confirmed the information that no one had been removed from the post held so far. The department referred to internal rules. However, its employees could not answer the question what exactly motivated this decision.

The General Staff also could not voice the sum of helicopter insurance coverage.

The main military department only reported that an investigation was underway and an international commission was working.

Meanwhile, 24.kg news agency found out that the crashed helicopter was insured for $ 1 million, whereas, according to Russian websites, a helicopter can be purchased on average for $ 10 million.

In any case, the amount of insurance will not cover the damage.

Own sources informed 24.kg news agency that one of the flight recorders had already been deciphered. The investigation only has to decipher the white box of the helicopter.

The Military Prosecutor’s Office will make its conclusion only after it visits the scene of the incident. However, it is not known what the investigation team will fly by, as the service life of all the aircrafts has already expired.

In addition to investigators of the supervisory body, the incident should be investigated by the Interstate Aviation Committee (IAC). But its representatives did not come to Kyrgyzstan. The IAC website not only has no information on the visit of its specialists to the republic, but the incident itself was not registered.

The Military Prosecutor’s Office has already sent a request to the IAC, but has not received a reply yet.

At present, only the commission of the Russian Defense Ministry is working on the basis of an agreement between the military departments. There is no data in open sources about the stage of the investigation.

According to military pilot Adil Dzhumabaev, the cause of the crash could be not only bad weather conditions, but, possibly, the pilot’s error.

«The helicopter was at an altitude of almost 4,000 meters above sea level. When an aircraft flies in the rarefied air, it needs large capacities and ideal meteorological conditions, that is, there must be a headwind. At this altitude, the slightest error of a pilot is fraught with consequences,» Adil Dzhumabaev shared his opinion.

The pilot’s error can not be excluded either, since in such conditions an aircraft must be operated by an experienced pilot

«Four military helicopters crashed within my remembrance — two during the Batken events and two in Southern and Northern Inylchek. Two more helicopters of the Ministry of Emergency Situations crashed in the mountains of Kyrgyzstan in the early 2000s, one of them — on Inylchek, the second — in Arpa Valley. The last four aircrafts crashed during rescue operations,» Adil Dzhumabaev said.

There is army, but no helicopters

Recently, it has been increasingly speculated that Kyrgyzstan could remain without combat helicopters, since their service life has expired. However, the experienced pilot explained that domestic helicopters can not be considered as old.

Many deputies compare helicopters with cars. This is not entirely right

In this case, the money for extending the service life of helicopters should be allocated from the budget.

Head of the tourist company Ak-Sai Travel Elena Kalashnikova, whose tourists were in the crashed helicopter, refused to comment.

She referred to the fact that the Military Prosecutor’s Office recommended her not to tell anything to reporters. The head of the largest travel agency, which recieves foreign tourists in Kyrgyzstan, also does not want to talk about the size of insurance.

What does the General Staff want to hide?

Six people were injured in the helicopter crash — three servicemen and three foreign tourists. A citizen of Poland was seriously injured. She is still in a private clinic. Her state is assessed as grave. The military suffered in the crash heal up.

As for the aircraft, it is still in the mountains. Nobody is going to lift it yet. One would be happy to return the helicopter, but there is simply no means for pulling it out from Inylchek. And judging by how the General Staff tries to hide the details of the accident, the results of the internal investigation and does not hurry to punish its staff, we can assume that the military department wants to hush up the helicopter crash case.