American Michael Brody: It is possible to live without a car in Bishkek

«The Fulbright program encourages participants to travel to neighboring countries in the region. Through my existing contacts in the sphere of renewable energy, I received an invitation to come to the American University of Central Asia in Bishkek. I came for a week, I gave some lectures and I visited other organizations related to environment and clean energy here. AUCA was interested in some further collaborations with me, so I applied for and received another grant to spend the summer here at AUCA,» he told. 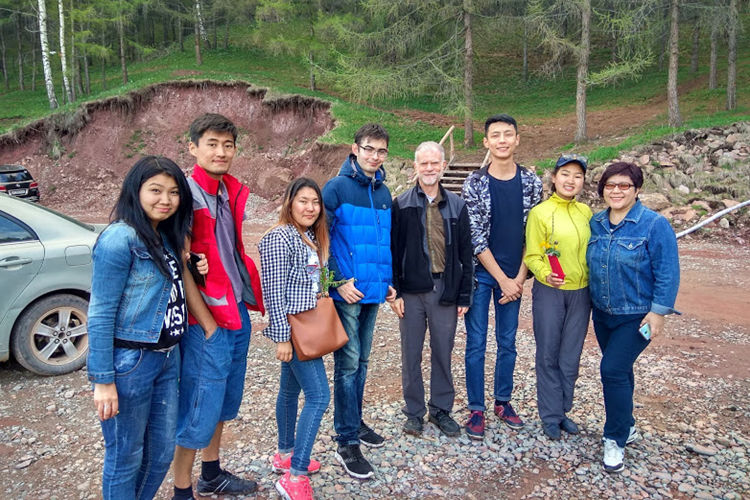 This is the third Michael’s visit to Bishkek and the longest one. But now he is living in an apartment instead of a hotel. The Professor lives in Asanbai microdistrict near the university.

«I am working on several projects here at the AUCA. I will be helping develop some possible new courses in environmental science and trying to develop projects related to air pollution and health here in Kyrgyzstan,» Michael Brody told.

He previously visited Russia and Ukraine, and before his arrival in Kyrgyzstan, he lived in Uzbekistan.

-I should start by saying I have not had any huge surprises here in Bishkek.

I have already spent so much time in Russia, Kazakhstan and Uzbekistan that I always feel very much at home in this part of the world.

My Russian language is pretty good, so it is fairly easy to do everyday things. And my neighborhood is a reminder that it is possible to live without a car. Because everything I need for daily living is very close.

However, the first time I came here was funny because I had been living in Uzbekistan. Here in Kyrgyzstan I felt that I was part of the modern world again. My credit card worked everywhere, I could take cash from machines, Internet worked very well. Uzbekistan had been very isolated for a long time and even though it is a wonderful country, there were many unusual things, such as what I just mentioned, not working so well.

However, I had always heard that Bishkek was beautiful and surrounded by mountains. But when I arrived the first time last December I couldn’t see any mountains. It was not until my 5th day that I could see those mountains.

So actually, I was a bit surprised about how bad the air quality is here.

On the airplane here from Moscow I was pleasantly surprised by the number of ecotourists coming here. With all of the beautiful mountains and lakes and the ability to come here for 60 days without a visa (at least from the US and Europe) has helped build tourism here.

The Tengri outdoor music festival on July 1 was really good. I did not know what to expect for outdoor activities in the city. It was great classical music.

-Bishkek is a capital, so there are many Embassies, there are regional offices of UN agencies, World Bank etc.; and so, there are some similarities in professional and cultural activities compared to Washington. There are nice places to walk here, green parks that is similar to Washington.

-What do you miss in Kyrgyzstan?

-I don’t miss anything yet. But in the US, I practice Tai Chi, and here in Central Asia it is not as common even though you are so much closer to China. So maybe I just haven’t found it yet. But Japanese Aikido seems to be popular here like in Tashkent. Also, there are many more cafes for really good coffee in Washington.

Since I grew up drinking more coffee than tea, I can never completely adjust to being only a tea drinker.

-I don’t know yet but went to a lovely outdoor concert (Tengri festival) in Park Pobedy, and this was very nice. Eventually I will go to Issyk Kul, I understand it is very beautiful.

-I have been eating Russian and Central Asian food for many years now. I consider myself to be a very serious international and experienced student of plov, besh barmak and shashlik!!! 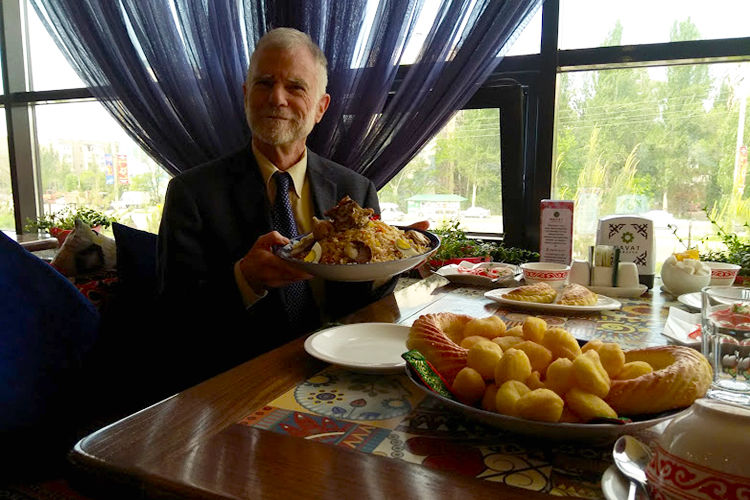 I am trying to understand the differences between the various common and similar cooking among the countries by eating a lot!! But I like all of the national cuisine so far, I have had kuurdak also.

I almost always try the local foods, and I have not seen anything yet that I would not try. And so far I have eaten everything. But maybe, we’ll see!

This is always fun. But when a foreigner, especially an American speaks reasonably well — one of these 2 languages, then the local people are always interested in talking.

Here in Bishkek I also often feel pretty local because I can talk with regular people. This is one of the main reasons I always feel at home in this part of the world.

-Unfortunately, there is no metro here in Bishkek. There may not be enough people, plus it is probably too mountainous. And then the first time I took a trolleybus, I had to wait over 30 minutes until it came. And rush hour here can be very bad. And I have heard that there are pickpockets on the marshrutkas. And they can be horribly crowded. So although it is very easy to get a taxi, it would be great if there were some improvements to public transportation.