Personal belongings of employees stolen from Chinese enterprise at Makmal 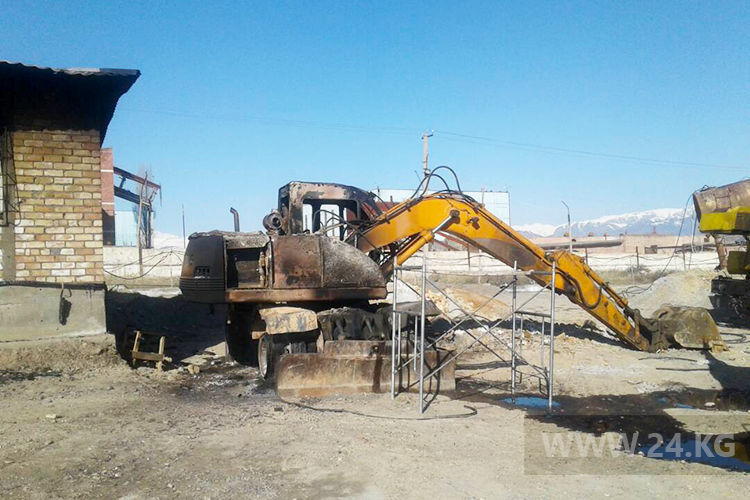 Personal belongings of employees were stolen from the territory of the Chinese enterprise GL Makmal Developing at Makmal. The company informed 24.kg news agency.

According to the company, all the employees of the enterprise have started work, but the Chinese investors do not yet know at whose expense the burned objects will be restored. It is known that the government and local authorities will be presented a bill for the equipment, damaged during the protest, its cost is approximately $ 5 million.

Representatives of the company also demand to bring to criminal responsibility the former head of Toguz-Toro district Tilek Idrisov.

In connection with the riots, he was released from his post by decision of the Prime Minister Sapar Isakov.

The police opened a criminal case under the articles «Hooliganism», «Deliberate destruction or damage of someone’s property by arson», «Mass riots» of the Criminal Code of the Kyrgyz Republic. No one has been detained so far.

Some Bishkek districts to have no gas for three days
News brief
20 April, Tuesday
12:48
Two patients die in Kyrgyzstan from coronavirus for 24 hours Two patients die in Kyrgyzstan from coronavirus for 24...
12:43
225 new cases of pneumonia, COVID-19 registered in Kyrgyzstan, 92,320 in total
12:29
Unknown people fire at car of political party founder in Kara-Balta
12:18
Prosecutor General of Kyrgyzstan names most corrupt state bodies
12:06
Referendum results: Votes to be recounted at some polling stations in Bishkek
11:33
Consumables for AstraZeneca vaccination arrive in Kyrgyzstan
11:25
Two boxers from Kyrgyzstan take 1st place at RCC Boxing Promotions
11:15
Three people injured in traffic accident in Bishkek
11:06
Heads of districts, their deputies to be appointed from personnel reserve only
10:12
UN headquarters approves Kyrgyzstan's initiative Nature Knows no Borders