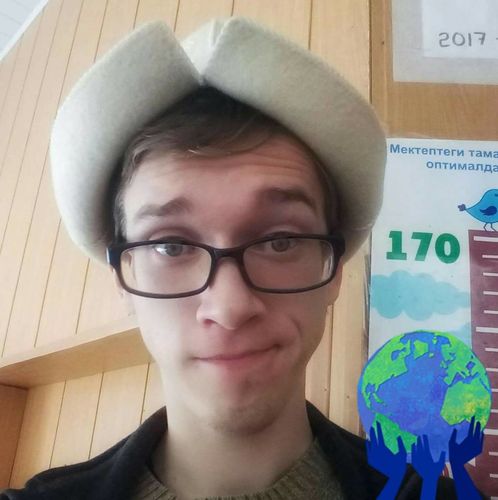 Andrew Wheeler grew up in the city of Spokane, Washington. He came to Kyrgyzstan as a volunteer for the Peace Corps. Now he lives in Naryn region and works as an English teacher. Andrew is fluent in Kyrgyz, like all the Corps volunteers.

-What surprised you most of all in Kyrgyzstan?

-My first surprise in Kyrgyzstan came early. I hopped off the airplane, shuttled off to my hotel in a marshrutka, and was greeted with two plates full of food. One plate had small fry bread, the other a powdery, round, white treat.

Starving, I grabbed a piece of the bread and ate it in a heartbeat. It was delicious. I did the same with the other treat. Immediate regret followed. It was sour and extremely salty cheese.

«I later came to know the bread as borsook and the cheese as kurut. It turns out it’s perfectly normal to inhale the former, but you’re supposed to nibble on the latter. Since then, I’ve been more careful about how I approach new foods, as it took nearly a week for my face to return to its normal, unpuckered position after my incident with the kurut, and, though I may not like everything I try, I grow from each new experience,» Andrew Wheeler told.

-What in Kyrgyzstan reminds you of your homeland?

— I grew up in a city nestled in lush, emerald mountains with green streets surrounded by mossy trees. As a university student, my mother was a florist. Her fondness for nature and gardening carried over into her later life as a loving caretaker. My mom cultivated all sorts of fruits and vegetables in our garden—from peppers to pears, raspberries to sunflowers—but what I remember most fondly was the wide variety of potatoes she grew. Every fall we harvested red, purple, blue, white, and yellow tubers from the ground and made a plethora of salads, soups, and meals from them like hashbrowns and fried, scalloped, mashed, and baked potatoes.

When I moved to my permanent site in Naryn, what I missed most were the plants, but some of the culinary staples make me feel at home. Naryn is famous for being the land of meat, but, more often than not, it boils down to being the land of ‘taters, which made the transition from American to Naryndyk life easier.

I was introduced to new, delicious ways of using the plant through dishes like kuurdak and dymdamaand salads like olyveyeand kyzylcha. At the same time, I still had access to foods I recognized from home, including fries and mashed potatoes, though that’s called purée here.

— What do you like in the national cuisine? And what are you afraid to even try?

-When I’m in Naryn and people ask me what my favorite national dish is, I respond that it’s beshbarmak, but it took me a while to get there. I initially disliked the flavor and texture of the national dish, but as I saw how it symbolized the bringing together of people, I grew to appreciate it for its cultural significance and my enjoyment of the flavor began with the addition of horse meat to the dish.

The first time I was offered horse, I was apprehensive, but it quickly became one of my most beloved proteins—probably because I was introduced to it through its most prized and delicious cut, chuchuk.

— Do you visit Bishkek? Where do you like to go?

— When I leave Naryn and have more options to eat food that reminds me of home, I most often go to Burrito on Chui Street by the White House. The food there is amazing and the workers are great. That stated, nothing beats biting into a soft, crusty, buttery, salty, spicy, microwave-cooked baked potato—one of the best feelings in the world.