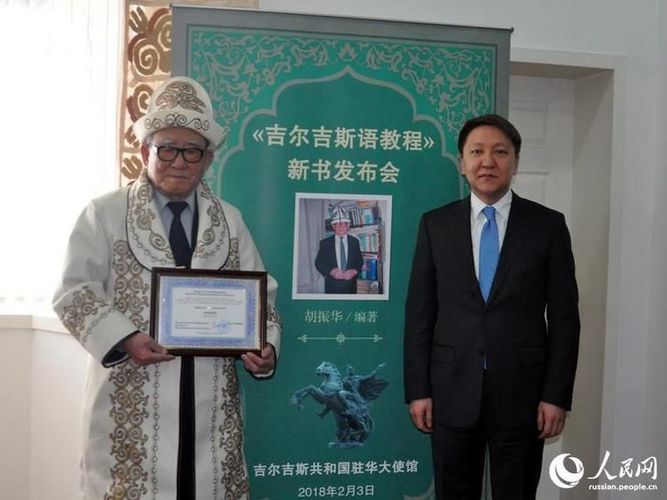 Kyrgyz language textbook, edited by the Honorary Professor of the South Central University for Nationalities of China, Hu Zhenhua, was presented at the Embassy of Kyrgyzstan in Beijing. People’s Daily newspaper reported.

The Ambassador Extraordinary and Plenipotentiary of Kyrgyzstan to the People’s Republic of China Azamat Usenov said that «the publication of the textbook is an important contribution to stimulating cultural contacts between Kyrgyzstan and China and strengthening friendly relations between the peoples of the two countries.»

Professor Hu Zhenhua noted that after President of PRC Xi Jinping put forward «One Belt, One Road» initiative, the number of people who want to learn Central Asian languages is growing in China.

The textbook was prepared on the basis of the textbook published in 1995 «The Kyrgyz Language Course.» It contains an anthem of Kyrgyzstan and a brief description of the history of the Kyrgyz people.

Hu Zhenhua is the founder of Chinese Kyrgyzology, the Scientific Adviser of the doctorate schoool of the Institute of Languages ​​and Literature of National Minorities of the Central University for Nationalities, the laureate of Manas Order of the 3rd degree, the Honorary Academician of the National Academy of Sciences of Kyrgyzstan.