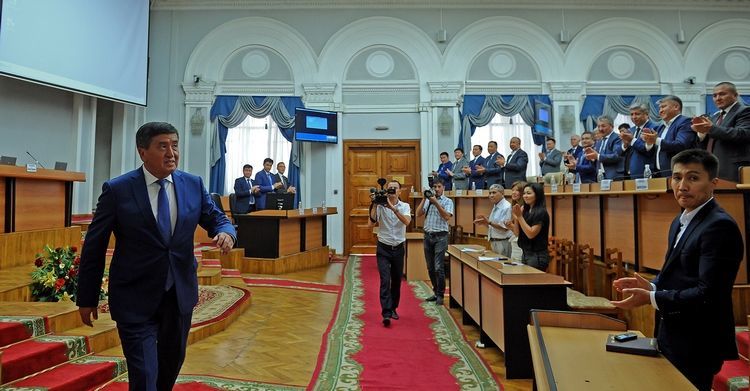 During the meeting, Prime Minister Sooronbai Jeenbekov said that today the Central Commission for Elections and Referendums of the Kyrgyz Republic officially registered him as a candidate for the post of the President.

«As you know, the Social Democratic Party of Kyrgyzstan nominated my candidacy for the post of president of the . Today, the Central Commission for Elections and Referendums of the officially registered me as a candidate for the post of the President of the KR. From that moment all my actions will be perceived through the prism of the fact that I am a candidate for the presidency. It is very important for me the elections to be transparent, clean, ensuring the free expression of the will of citizens, so that politicians don’t accuse me of using administrative resources. In this regard, I decided to give up the powers of the Prime Minister of the on August 22, 2017. I will send the relevant application to the President of the Kyrgyz Republic Almazbek Atambayev,» Sooronbai Jeenbekov said.

He thanked the members of the Government and the staff for their joint successful work for a year and a half.

«Today’s event is very important in my life. This decision I inform you, my colleagues, with whom I worked together as prime minister of the . Last year in April, the president and the parliament gave us great confidence. Since my election as Prime Minister of the , we have worked together to implement «Trust and Unity» program. For the sake of the state’s interests and development of the country we worked tirelessly, without days off and holidays. Our main principle was to, without interfering in politics, focus on solving economic and social problems, developing the economy and the economy as a whole. During this time we managed to achieve a constructive dialogue with the president and the parliament. Thanks largely to this, we managed to achieve positive results in our work,» Sooronbai Jeenbekov emphasized.