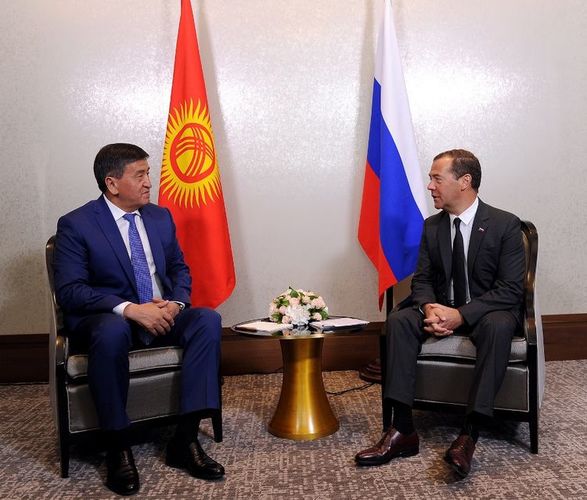 Prime Minister of Kyrgyzstan Sooronbai Jeenbekov today, August  Astana, held talks with the Chairman of the Government of the Russian Federation Dmitry Medvedev.

The working meeting of the heads of government of  and was held in the framework of the regular meeting of the Eurasian intergovernmental council. Sooronbai Jeenbekov and Dmitry Medvedev discussed the prospects for bilateral relations in the trade, economic, cultural and humanitarian spheres.

«Cooperation between our countries is dynamically developing, there is constant political contact at a high state level,» the head of the Kyrgyz government stressed.

Sooronbai Jeenbekov recalled that in June of this year, the state visit of President Almazbek Atambayev to Russia took place, following which a number of important bilateral documents were signed.

«The signing of the Federal Law allowing Kyrgyz citizens to use their national driver’s licenses in  is also aimed at improving bilateral relations. Taking into account the existing potential for cooperation, it is necessary to take steps to increase the trade turnover between the countries, which in the first half of 2017 amounted to over $ 500 million. I am confident that by joint efforts we will be able to significantly increase the volumes of mutual trade,» Prime Minister Sooronbai Jeenbekov said.

Russian Prime Minister Dmitry Medvedev noted the importance of developing Kyrgyz-Russian cooperation both in bilateral format and in the format of the Eurasian Economic Union.

«Today, the parties have a clear understanding of the need for constructive dialogue aimed at expanding and deepening the Kyrgyz-Russian cooperation. The main thing is that the joint work is in the national interests of the two countries, contributing to even greater integration, including within the framework of the Eurasian Economic Union. Recently, there has been an increase in mutual trade due to new commodity groups produced in the . This is a positive aspect in the framework of bilateral cooperation, which we want to consolidate,» Russian Prime Minister Dmitry Medvedev stressed.