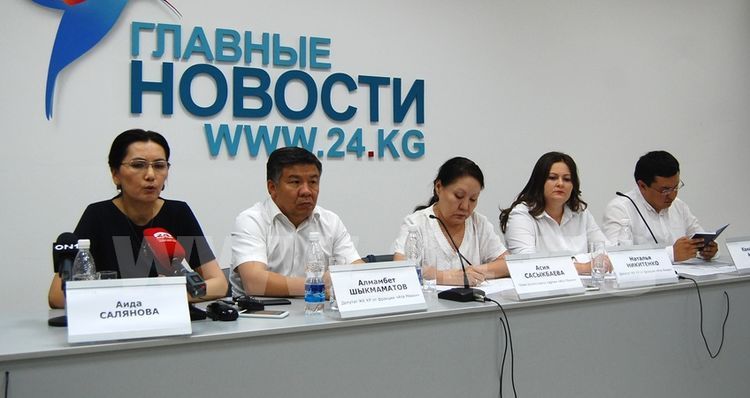 The Socialists threaten to go on a hunger strike if Omurbek Tekebayev is not allowed to pass the state language exam. Member of the political council of Ata Meken party Asiya Sasykbaeva told today at a press conference.

According to her, Omurbek Tekebayev was nominated by Ata Meken political party as presidential candidate. The CEC accepted his documents. The commission also sent a list of people who must pass the state language exam in Kyrgyztest. Omurbek Tekebayev is the 2nd in this list. At the same time, the CEC now avoids the solution of the problem.

«Omurbek Tekebayev submitted documents to the CEC. We also collected 40,000 signatures, although 30,000 are required by the law. There is a third stage — the state language exam. But Omurbek Tekebayev is not allowed to pass it. Today, the court hearing is held without participation of lawyers and defendants. We see no other way to pay attention to the problem other than to announce a hunger strike of the defendants Omurbek Tekebayev, Duishenkul Chotonov and their supporters," Asiya Sasykbaeva said.

«We call on the President Almazbek Atambayev to come to court and give evidence, as he was repeatedly asked. Also, he must pay attention to the violation of laws. As the only person who keeps his hand on the pulse of the country and monitors the implementation of laws, he must ensure the constitutional rights of presidential candidates," she added.