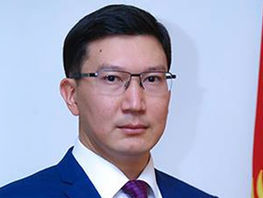 The situation at Kyrgyzaltyn mines is hopelessly bad. The reserves are practically depleted, the mining technology and equipment are morally obsolete. But the company’s management is calm. Almaz Alimbekov, Chairman of the Board of Kyrgyzaltyn, told to 24.kg news agency who is ready to invest in one of the dying mines — Makmal.

— Currently, the company is often criticized, believing that it is of no use. Gold is almost not mined, there is little profit…

— Kyrgyzaltyn OJSC once owned 18 licenses for subsoil use. Later, they were withdrawn and sold for pennies. Instead of helping the national company, everything was done in the interests of certain individuals. As a result, Kyrgyzaltyn has only three deposits with exhausting stocks.

— It seems that the critics are right: the company is slowly dying…

— No, it is not so. The situation is different today. We want the company to work and bring profit to the state budget. To do this, we decided to make Kyrgyzaltyn JSC a holding company. Therefore, we began to reform it. All our production branches are transformed into joint ventures. Kyrgyzaltyn OJSC will be a management company with a share in joint projects. The company is ready to work in a new format. These reforms are needed. They will give a good impetus to the development of our production branches.

— A joint venture was for the first time mentioned when you talked about Makmal mine. But, therewith, you are constantly talking about its unprofitability.

— I will give an example for comparison. Until 2003, it had good indicators, the mine produced more than of gold a month. Of course, the mineral and raw materials base was good. More than 1,200 people worked at the mine. Now we hardly extract of gold, and 1,100 people work at the enterprise. The raw material that is mined not actually provides the mine itself. Therefore, Kyrgyzaltyn OJSC is forced to subsidize it.

It’s easier, of course, to close the mine. But we can not massively cut jobs. This will cause social discontent: there is simply no other work, the largest facility is the plant.

-Is it only about a large number of workers?

— By no means. The second reason for the plant’s unprofitability is the current technology. It is morally obsolete and does not allow full extraction of gold from the ore. There are practically no mineral resources. Plus the high cost price. has to be transported to the factory. In addition, the development is underground, which is more expensive than stripping.

— So, the mine still has to be closed?

— No. We are looking for an investor for the project. Otherwise, Kyrgyzaltyn will not be able to subsidize it any more. And this is understood by the mine workers. Makmalzoloto became unprofitable in 2012. Wearing of equipment was more than 50 percent. Makmal can be saved only by investments that we want to do following the example of Terek-Sai mine. It was in the same situation after all, even, probably, in the worst.

— Why investors are to be attracted, if the reserves at the mine are exhausted? Who needs a dying mine?

— The mineral resource base has depleted. And the reserves will last only until the end of the year. But not everything is so deplorable. If one invests, then there is the prospect of extending the work of Makmal mine and a good one. We have something that will interest investors and will allow Makmalzoloto plant to work for another five years, or maybe even longer.

— What are these secret achievements?

— This is the development of man-made dumps of cut-off grade ore. There are about 11.2 million tons of ore with reserves of 5–6 tons of gold. Geological exploration of Vostochnaya and Dioritovaya mines, which have, according to forecasts, about 14 tons of gold is needed. In addition to investors, we offer a prospective facility for development. This is the waste of the Makmal tailing dump with approximate gold reserves of 5 tons.

— Sounds good, but how real is it?

— A similar situation was at Terek-Sai mine. It is much older and had worked for more than 60 years. There were the same problems — the old technology, the reserves of the mineral and raw materials base have been exhausted. It used to happen that the plant on Terek-Sai mine could stand idle for two years and longer. It had to send people on vacation. It was stopped because of unprofitability. The cost price of gold production exceeded almost three times its market value.

But we negotiated with investors in time and established a joint venture with the Turkish partners Eti Bakyr Terek-Sai with a registered capital of $ 40 million. They have paid $ 20 million to the state budget.

Under the terms of the agreement, Kyrgyzaltyn’s share in the joint venture is 25 percent, foreign partner — 75 percent. Now the work there is in full swing: a mineral separation plant with a production capacity of about 65,000 tons of ore per year at the beginning is being built there. Necessary working conditions are created for the employees. About 80 percent of the local residents are provided with jobs. The salary is stable, the investor fulfills all social obligations.

I think this is a good example.

-You think the same is possible at Makmal. You even said that there were potential investors. Who is ready to invest?

— As of today, three companies have become interested — one from (Singapore Gold), (Demirkiran Madencilik) and (Everest Oil LLC). Memorandums of cooperation have been signed with them. Potential investors are ready to invest in the comprehensive development of Makmalzoloto. They are now studying the reserves and feasibility study of the project. After the final evaluation of Makmalzoloto, we will announce a competition.

The contract will be concluded only with the company that offers the best and most favorable terms. The conditions for the branches will be studied separately, of course.

After the transfer to the investors of Makmal mine and at the expense of the investments, we plan to modernize the production capacities of all the branches of Kyrgyzaltyn OJSC.

This also applies to Solton-Sary mine. Everything is normal there: the factory is stable, gold is mined. But we have a section Altyn-Tor, where exploration is in progress. Unfortunately, our financial resources are not enough. Therefore, it is planned to attract investors there not to repeat the situation of Makmal in the future.