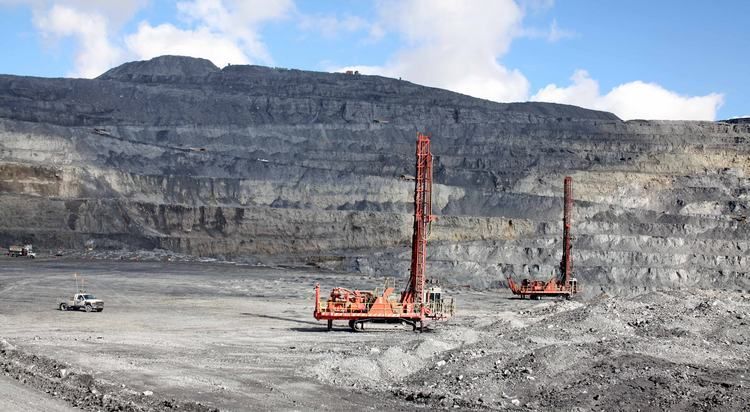 In the first three months of 2017, Kumtor Gold Company produced or  of gold and contributed more than 2.2 billion soms in taxes and mandatory payments.

Gold production for the first quarter of 2017 was compared to  of gold in the comparative period of 2016.

The increase in ounces poured is a result of milling higher grade ore from stockpiles mined from cut-back 17 of the Central pit at the beginning of the fourth quarter in 2016, compared to the lower grade ore mined and processed from the initial benches in cut-back 17 during the comparative period.

During the first quarter of 2017, Kumtor focused on simultaneously developing both the Central pit through mining cut-back 18 and the commencement of mining at the Sarytor pit.

The Sarytor pit is approximately three kilometres south of the Central pit. The Company expects to obtain access to the Sarytor ore in the second half of 2017.

During the first three months of 2017, contributions to the national budget in taxes, deductions to the Social Fund and other mandatory payments have totaled 2.2 billion soms.

At Kumtor, 2017 total capital expenditures, excluding capitalized stripping, are forecast to be $96 million. Spending on sustaining capital of $68 million relates primarily to major overhauls and replacements of the heavy duty mine equipment ($58 million), major overhauls and replacements of mill equipment ($3 million) and other items ($7 million).

Growth capital investment at Kumtor for 2017 is forecast at $28 million and includes:

Scott Perry CEO of Centerra Gold stated, «While the Company had a good quarter operationally and financially, it was over shadowed by a tragic event which occurred in April at Kumtor when an employee was fatally injured while inspecting a light vehicle in the field. This tragedy reinforces our commitment to our Company-wide safety leadership program «Work Safe, Home Safe» which we continue to roll out to all our sites.»