Almazbek Atambayev received archaeologist Yuliy Khudyakov and ethnographer Viktor Butanayev, who contributed to the study of the history of the Kyrgyz during the Middle Ages. Both scientists were awarded Manas Orders of III degree, the Information Policy Department of the President’s Office reported.

«The hypothesis that the Kyrgyz people inhabited a vast area from Yenisei and the northwestern part of  to the Tien Shan, and the Pamirs has long been the subject of scientific discussions. According to it, the Yenisei and Tien Shan Kyrgyz are one people, and the (VII–VIII) and Kyrgyz (IX–X) khaganates are the stages of the history of Kyrgyz statehood. There is your merit in its proof," the President said, addressing the scientists. 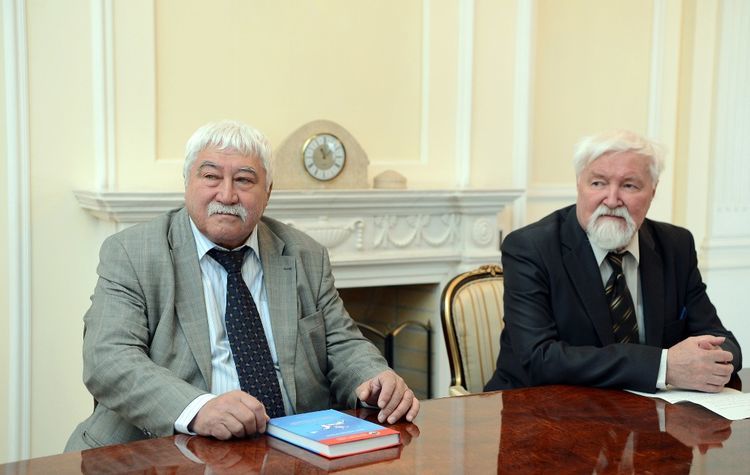 Taking into account that the 1,200th anniversary of the Kyrgyz Kaganate will be celebrated in 2040, Almazbek Atambayev noted the importance of strengthening the knowledge of the medieval history of the Kyrgyz by new scientific discoveries.

Yuliy Khudyakov is an archaeologist and historian of military affairs of ancient and medieval peoples of South Siberia and .  Basing on the materials of archaeological expeditions in Khakassia, the , Tuva, , , he shows the similarity of the material culture of the Kyrgyz in this whole area. His monograph «Armament of the Yenisei Kyrgyz of the VI–XII centuries," published in 1980, is one of the key works for researchers of the history of Kyrgyz during this period.

Victor Butanayev is an ethnographer and turkologist. He studied the ethnopolitical organization of the Yenisei Kyrgyz of the late Middle Ages. In his works, he proves the unity of the , Altai and Tien Shan Kyrgyz.

link: https://24.kg/english/49793/
views: 1115
Print
Related
Kyrgyz scientists must work for the benefit of real economy
Platform for scientists to be organized within World Nomad Games
Scientist from Kyrgyzstan becomes laureate of CIS Award Stars of Commonwealth
Alfiya Samigullina: Science in Kyrgyzstan is separated from practice
Popular