Members of the Parliament from SDPK faction Irina Karamushkina and Marat Amankulov visited the Crimea as part of a delegation of deputies of the national and European Parliaments and met with the vice speaker of the local parliament as members of the «political council of the Social Democratic Party of Kyrgyzstan." Official website of the State Council of the says. 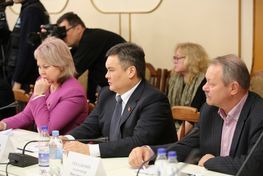 «During the meeting, foreign guests were interested in the achievements, problems of the republic and the moods of its residents. In particular, foreign parliamentarians worried about the legal status of the Crimea in the Russian Federation, the representation of the Crimean Tatars in power, manifestations of Islamic radicalism among the youth and the construction of a transport crossing through the Kerch Strait," the statement says.

Earlier, Marat Amankulov stated about private nature of the trip to the . And the Ukrainian Ambassador to , Mykola Doroshenko, commented on Facebook the explanation of the member of SDPK faction on this matter. The Embassy itself strongly condemned this visit, urging the Kyrgyz authorities to respect the territorial integrity of the Ukrainian state.