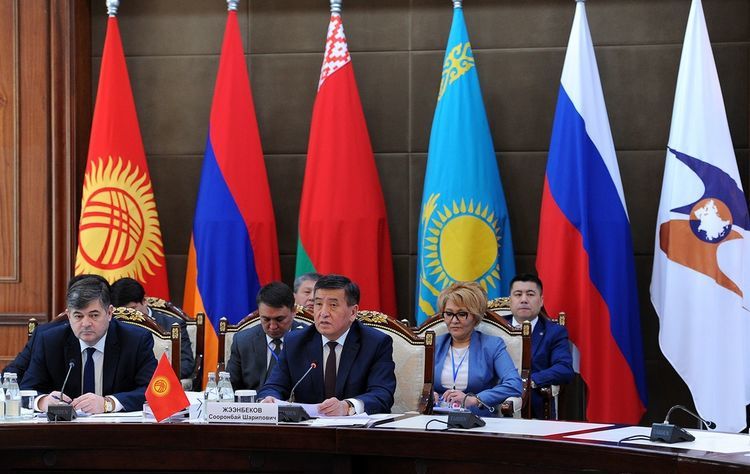 Today, Bishkek hosts the meeting of the Eurasian Intergovernmental Council. This is the first large event within the year of ’s chairmanship in the Eurasian Economic Union.

Now the meeting of the Intergovernmental Council is held in an expanded format. The first who took the floor was the head of the Kyrgyz government Sooronbay Jeenbekov. He once again told how the republic sees the union in the near future.

The Prime Minister noted that five meetings of the Eurasian Intergovernmental Council were held to implement the agreements and various economic initiatives in 2016. Sooronbay Jeenbekov suggested not slowing down the pace.

Regular meetings provide an opportunity to exchange views, sort out priorities and outline the main areas that should be addressed, he believes.

It was noted that the Chairman of the Supreme Eurasian Economic Council, President of Kyrgyzstan Almazbek Atambayev in his address to the heads of EEU countries proposed to devote 2017 to the creation of the best conditions for business development in the Eurasian space and focused on the main aspects of the union’s activities in 2017.

Activation of investment policy, signing of a pension agreement for workers and their families are among the main EEU issues.

In addition, it is adoption of strategy for the formation of a digital space, implementation of the main areas of industrial cooperation, liberalization of EEU services market, the coordinated transport policy of EEU countries, the development of the concept of formation of the common financial market of the . To implement these directions, first of all, an interested approach and coordinated work are needed, Sooronbay Jeenbekov said.

The Prime Minister of the recalled that information and communication technologies have an increasing influence on the development of the world economy and international trade. Therefore, the Kyrgyz side welcomes formation of a digital agenda of the union. At the same time, digital technologies are necessary component not only of the process of integration of EEU countries, but also inclusion of countries of the in the processes of global digital transformation.

The digital agenda is not just a trend, but an urgent need allowing to optimize management and production processes, reduce time, bureaucracy and expand borders.

proposes to accelerate the development of the main directions for the implementation of the digital agenda of EEU until 2025.

again reminded that it insists on simplifying the procedures for making decisions in EEU bodies. It is important that decisions and documents are made and approved in a timely manner, and issues are resolved on the merits.

«There is a lot of criticism from society about the effectiveness of our integration. I think that only practical steps aimed at the formation of regional production links both within the union and integration into international ones will help to change the public opinion and increase the credibility of integration,» Sooronbay Jeenbekov is sure.

He noted that the presented analytical work on identifying sectors of economies that have integration potential will become a practical guide to action. Also, the head of the Cabinet noted the decisions on the establishment and effective development of industrial production, increase of the export industrial potential.

We consider it necessary to note the importance of developing trade and economic relations with the third countries, taking into account global trade trends. This will contribute to the growth of trade flows.

«I hope that the decision to set up production facilities for the production of ancillary agricultural equipment will be a good example for creating regional production cooperation. The decision on joint forecasts for the development of the agro-industrial complex should be also noted. At the same time, the work on developing foreign trade relations should not replace the work on improving the rules of trade within the union and removing barriers, exemptions and restrictions. Together, we must achieve equal access to the common market of EEU,» concluded Sooronbay Jeenbekov.