Rally in support of Almambet Shykmamatov held at GKNB in Bishkek

Rally in support of MP Almambet Shykmamatov is held in front of the State Committee for National Security (GKNB) building in Bishkek. 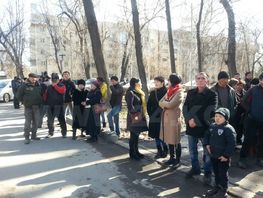 The member of Ata Meken parliamentary faction was summoned to GKNB in connection with a criminal case initiated against him. About 30 people gathered on Erkindik Boulevard.

According to the civil activist Adil Turdukulov, who organized the rally, the protestors also speak in defense of nine prisoners charged with attempt to overthrow the government.

«We believe that the authorities continue repressive policies, and the National Security Committee became a kind of instrument for the fight against dissidents. There is also a defamation of political opponents through the controlled by the authorities media in the country. Therefore, we will hold a  rally in front of OTRK on March 28. We have sent the appropriate notification to the mayor’s 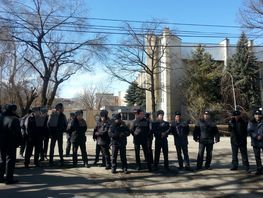 office and the Department of Internal Affairs of Bishkek," Adil Turdukulov said.

Protesters have no posters. They do not commit unlawful acts. Law enforcement officers control order at the scene.