Signatures are being collected from residents of some districts of Bishkek in support of the decision of the Oktyabrsky District Court of the capital on Kumtor Gold Company CJSC. The townspeople report.

The signature sheet was published on social media. 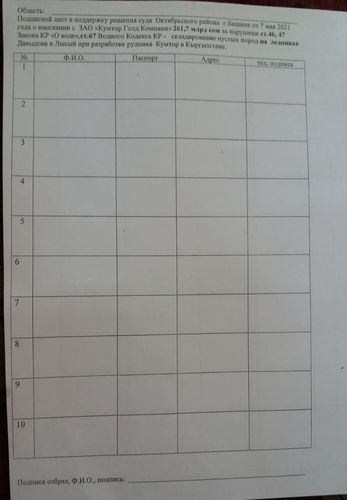 According to them, signature sheets were brought to heads of house committees and district councils with a demand to collect signatures of the residents of the houses.

Earlier, a reader of 24.kg news agency also reported that the heads of house committees ask for assistance via WhatsApp in collecting signatures in support of the court’s decision.

«The forms were handed out to us in the district administrations. We have to collect a million signatures from Kyrgyzstanis. Passport data and signature are required. Please help us,» the audio message says.

Earlier, Kumtor company was fined 261.7 billion soms by a court decision for dumping waste on glaciers. The unprecedented decision was made by the judge of the Oktyabrsky District Court of Bishkek Albina Dzheenbekova. The court also ruled to collect a fee of 1,308,653 billion soms.