Acting President of Kyrgyzstan, Prime Minister Sadyr Japarov took part in a regular meeting of the Council of Heads of Government of the Commonwealth of Independent States in the format of a videoconference. Press service of the Executive Office of the Cabinet of Ministers of Kyrgyzstan reported.

Sadyr Japarov told that the socio-political situation in the country was stable, political processes in Kyrgyzstan have returned to the legal framework, the composition and structure of the Government have been approved in accordance with the norms of the Constitution, and also added that the republic remained fully committed to all previously assumed obligations and strict implementation all previously signed bilateral and multilateral treaties and agreements.

He noted that at present all the efforts of the Cabinet were aimed at restoring the socio-economic situation of the country and preparing to prevent the spread of the second wave of the coronavirus pandemic.

Sadyr Japarov expressed confidence that the results of the meeting of the Council of CIS Heads of Government would become a good basis for further constructive interaction of the CIS member states. «I am convinced that our joint purposeful work will contribute to the process of strengthening close ties and mutually beneficial partnership in the interests of our states,» he concluded.

Following the meeting, decisions and a number of documents were signed in the field of cross-border transportation of radioactive materials and information interaction of the CIS member states in the field of digital development of society. The next regular meeting of the Commonwealth will be held on May 28, 2021 in Minsk.

The Heads of Government of the CIS countries congratulated Sadyr Japarov on his appointment to the post of Prime Minister of the Kyrgyz Republic. 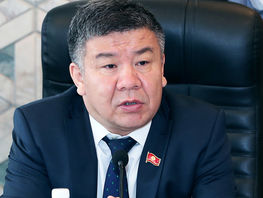