According to them, administration of the recreation center received a letter from the so-called Coordination Council in Sary-Oi village. It says that it was decided to create voluntary people’s guards to protect objects and property in the resort area until the situation in the country stabilizes. 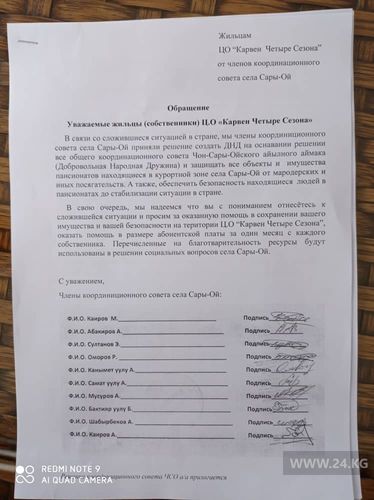 «But at the same time, all owners of property at the recreation center were offered to pay for assistance a fee for one month. The Coordination Council announced that the funds received would be used to address social issues in Sary-Oi village,» the readers said.

It should be noted that similar letters, allegedly from people’s guards, are sent out on the social media which are also received by other owners of resorts and holiday centers. They also encourage to pay money.