Union of Journalists of Ukraine expresses solidarity with Kyrgyz colleagues

The National Union of Journalists of Ukraine expresses its support for the journalists of Kyrgyzstan, who, despite the great risks, continue to fulfill their professional duty. The organization reported. 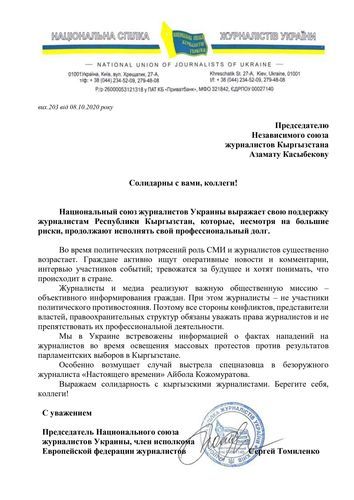 It is noted that during political upheavals, the role of the media and journalists increases significantly. Citizens are actively looking for operational news and comments, interviews of participants of the events; they worry about the future and want to understand what is happening in the country.

Journalists and media carry out an important public mission — objective informing of citizens. At the same time, journalists are not participants of political confrontation.

National Union of Journalists of Ukraine

«Therefore, all parties to conflicts, representatives of the authorities, law enforcement agencies are obliged to respect the rights of journalists and not interfere with their professional activities,» the letter says.

The Ukrainian colleagues also noted that they were alarmed by the information about the facts of attacks on journalists during the coverage of mass protests against the results of the parliamentary elections in Kyrgyzstan.

«We are especially outraged by the case of shooting at the unarmed Current Time journalist, Aibol Kozhomuratov, by a special forces soldier. We express our solidarity with Kyrgyz journalists. Take care of yourself, colleagues!» the journalists write.