The Administrative Court of Bishkek refused to satisfy citizens’ application to suspend the Detailed Development Plan of the central part of the capital until the court decision on this case enters into force. Lawyer Erik Iriskulbekov told 24.kg news agency.

The decision notes that the plaintiffs challenged the decision of the Bishkek City Council on the approval of the Detailed Сity Development Plan and statement that failure to take measures to suspend it cannot complicate or make impossible execution of the court decision. 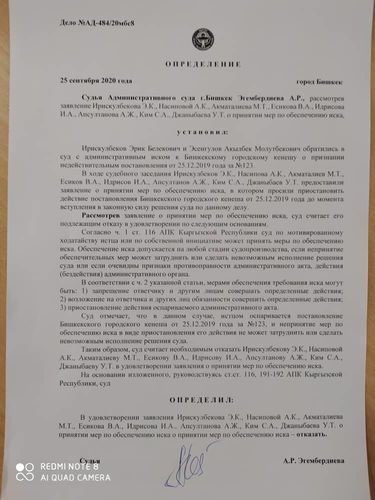 The Prosecutor’s Office of the capital had previously found shortcomings and inconsistencies in the draft Detailed Development Plan of the central part of the city. Access to the plan was closed for unknown reasons. Even the court was not able to get it.

The Detailed Development Plan of the central part of Bishkek, which the capital’s deputies adopted without discussion, is at the center of the scandal. While officials are trying to convince the townspeople that their private property is not in danger, a lawsuit was filed with the Interdistrict Court to cancel the plan, and the Bishkek City Council is the defendant.

At a meeting with an initiative group of citizens at 24.kg news agency, the city authorities agreed that the Detailed Сity Development Plan needs to be finalized.