More than 9.2 tons of gold produced at Kumtor in the first half of 2020 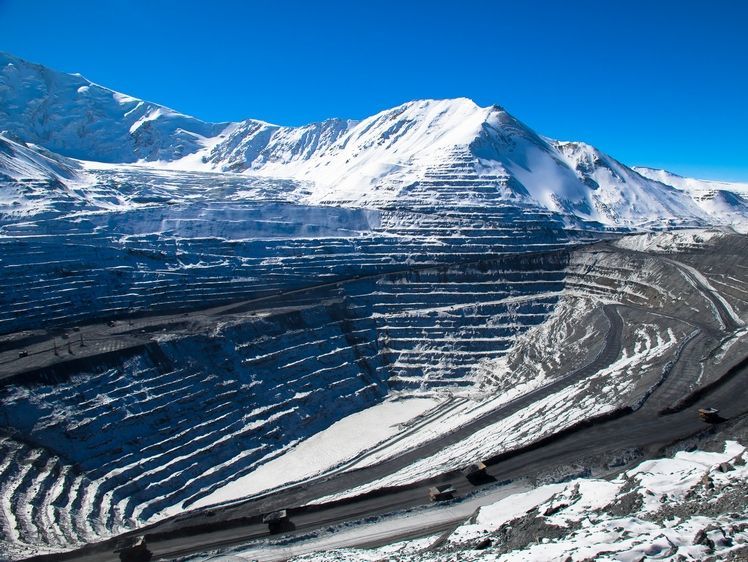 Centerra Gold Inc. (Centerra) and Kumtor Gold Company (KGC) have summed up their operating results for the second quarter of 2020. For the first six months of 2020, KGC produced 325,551 ounces or 10,125.77 kg of gold and contributed more than 6.46 billion soms in taxes and mandatory payments. The Media Relations Department of Kumtor Gold Company reported.

Kumtor continues to implement mitigation controls and health & safety precautions at the mine site to contain the spread of COVID-19. While Kumtor’s operations in the second quarter were not affected, the Company has begun to notice an effect on the availability of Kumtor’s workforce due to a greater rate of COVID-19 infections and other illnesses in the Kyrgyz Republic. As a result, open pit mining operations have been running below full capacity in July, though mill processing operations continue to work at full capacity and are expected to maintain gold production by processing stockpiles as planned for the year.

The company will continue to adjust its plans as necessary to ensure the safety of Kumtor’s personnel and local communities.

As Kumtor is an isolated mine site with an on-site camp, all employees and contractors are required to undergo comprehensive testing and remain in an offsite quarantine facility prior to traveling to the mine site. As of July 21, 2020, 381 employees and contractors have tested positive for COVID-19, representing approximately 4.3% of 8,837 tests performed on the Kumtor workforce. 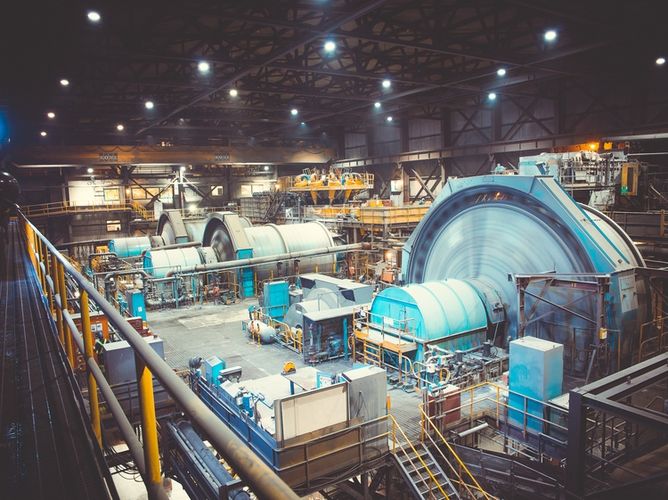 Total revenues from gold sales in the second quarter of 2020 were $286.4 million.

During the second quarter of 2020, Kumtor continued stripping and managing the ice from cut-back 20. Tonnes mined were 23.1 million compared to 39.9 million tonnes in the comparative prior year period, representing a decrease of 42%, mainly due to longer haulage distances as a result of the change in waste rock dump location from the Lysii Valley to the Central Valley and lower equipment utilization due to reduced workforce availability.

The 23.1 million tonnes mined in the second quarter of 2020 were capitalized as waste stripping for the benefit of future production from cut-back 20.

During the second quarter, the final waste rock dump design was completed and submitted for Government approval to re-utilize the Lysii Valley for the placement of waste rock going forward.

Lysii Valley is expected to be the main mine waste rock dump for the next two years as it is closest to cut-back 20.

Permitting to utilize the Lysii Valley was received on July 24 therefore in the third quarter of 2020 mine waste tonnage movement is expected to increase to planned levels.

Processing costs per tonne were $11.17 in the second quarter of 2020 compared to $11.51 in the same prior year period, primarily due to a favourable foreign exchange rate movement, lower electricity and contractor costs.

This was partially offset by higher costs of the contractor processing the carbon fines due to an increase in contract rates.

Kumtor’s all-in sustaining costs on a by-product basis per ounce sold4, which excludes revenue-based tax, were $696 per ounce in the second quarter of 2020 compared to $562 per ounce in the same prior year period. The increase was mainly due to greater capitalized stripping costs as mining activities were concentrated on stripping cut-back 20 and the purchases of eleven trucks to increase the mining capacity of the mine and positions Kumtor to take advantage of future expansion of the mine. This was partially offset by higher ounces sold, lower production costs and lower sustaining capital costs.

During the second quarter of 2020, exploration drilling programs continued with the completion of fifteen diamond drill holes for 4,663 metres. Exploration drilling focused on testing zones of sulfide and oxide mineralization along the corridor between the Central and Southwest pits (Kosholuu, Hope and Southwest Oxide Deep zones), on the periphery of the Sarytor Pit, Northeast targets and Muzdusuu area.

In April 2020, due to COVID-19 preventive measures, exploration drilling at Kumtor was temporarily suspended, resuming in June 2020.

Due to the delay, a certain portion of the planned drilling program could be deferred to 2021.

The 2020 planned drilling program at Kumtor includes 55,000 metres of exploration and 15,000 metres of infill drilling, which are focused on priority primary and potential targets. Primary targets include various zones of the Central, Southwest and Sarytor deposits (areas) based on enhanced geological modelling from the recently updated Kumtor resource block model, and positive drilling results from 2018 and 2019.

In addition, the 2020 planned drilling program at Kumtor includes the underexplored segments of the Kumtor Gold Trend — the Northeast targets, Bordoo, Akbel and conceptual targets (Hope Zone and others).

An exploration potential update will be included in an updated Kumtor technical report expected to be released in the fall of 2020.

Operating Results of the Kumtor Project5

2 - Unless specified otherwise, all dollar figures in this news release are in US dollars.

3 - Numbers may not add up due to rounding

4 - Non-GAAP measures and are discussed under “Non-GAAP Measures” in Centerra’s MD&A and news release dated July 31, 2020.

During the first six months of 2020, contributions to the national budget in taxes, deductions to the Social Fund and other mandatory payments have totaled 6.46 billion soms. 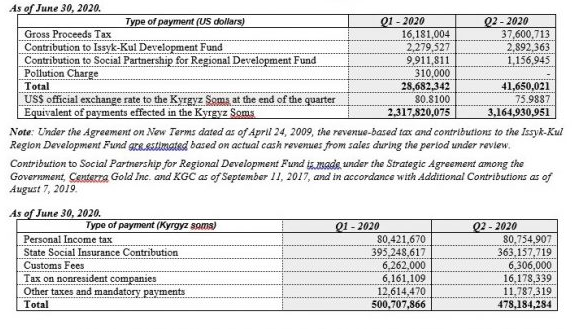 Scott Perry, President and Chief Executive Officer of Centerra stated, «We continue to stay vigilant at all of our operations to prevent an outbreak and avoid the spread of the COVID-19 virus and to ensure the health, safety and well-being of our employees, contractors and communities. Our continued commitment to Work Safe Home Safe is a driving force behind achieving a safe workplace.»

«The strong operating performance at Kumtor and Mount Milligan continued into this quarter and our Öksüt Mine achieved commercial production during the quarter. Kumtor had another strong quarter producing 173,245 ounces of gold at all-in sustaining costs on a by-product basis4 of $696 per ounce sold.»

«The decision of Centerra’s Board to increase the quarterly dividend by 25% to C$0.05 per common share announced July 31, 2020, and planned into the future was based on our strong operating performance and the higher gold price environment, both of which contributed to our growing free cash flow and a debt-free balance sheet as at June 30, 2020.»

The Kumtor open pit mine, located in the Kyrgyz Republic, is one of the largest gold mines in Central Asia operated by a Western-based gold producer. It has been in production since 1997 and has produced over 13 million ounces of gold to June 30, 2020.

Centerra Gold Inc. is a Canadian-based gold mining company focused on operating, developing, exploring and acquiring gold properties in North America, Asia and other markets worldwide and is one of the largest Western-based gold producers in Central Asia. Centerra operates two flagship assets, the Kumtor Mine in the Kyrgyz Republic, the Mount Milligan Mine in British Columbia, Canada and has a third operating gold mine, the 100%-owned Öksüt Mine in Turkey. Centerra’s shares trade on the Toronto Stock Exchange (TSX) under the symbol CG. The Company is based in Toronto, Ontario, Canada.

The Kyrgyz Republic, via Kyrgyzaltyn JSC, is Centerra Gold’s largest shareholder owning 77,401,766 common shares. As of August 10, 2020, Kyrgyzstan’s interests were estimated at $ 1 billion.

Additional information on Centerra Gold Inc. and the full text of the news release on the Second Quarter of 2020 are available on SEDAR at www.sedar.com and the corporate websites at www.centerragold.com and www.kumtor.kg.

link: https://24.kg/english/162207/
views: 512
Print
Related
Kumtor contributes over 78 million soms to Health Ministry of Kyrgyzstan
Kumtor Gold to provide 90 oxygen concentrators to Issyk-Kul health facilities
Over 4.7 tons of gold produced at Kumtor in the first three months of 2020
Gold myths, or what fakes do economists feed us with in quarantine
Over 18.6 tons of gold produced at Kumtor mine in 2019
Kumtor to allocate $ 100,000 to Issyk-Kul region for combating coronavirus
Deon Badenhorst: We have an opportunity to extend life of Kumtor mine
Commission formed to investigate death of Kumtor employee on Petrov lake
Body of drowned Kumtor employee found in Dzheti-Oguz
Kumtor employee goes missing in Dzheti-Oguz on Petrov lake
Стоимость акций Центерры на бирже в Торонто (TSX)
на 17.09.2020
USD 12,67