Kyrgyz for 2 months. What American likes about relationships in local families

An American Jonathan Lu is a Peace Corps volunteer. He came to Kyrgyzstan in 2018 and teaches English at a school in Naryn. Jonathan has learned the Kyrgyz language for two years and speaks it no worse than the locals do.

Before I arrived, I only heard about the military air base at Manas Airport. I read about it in the newspapers. 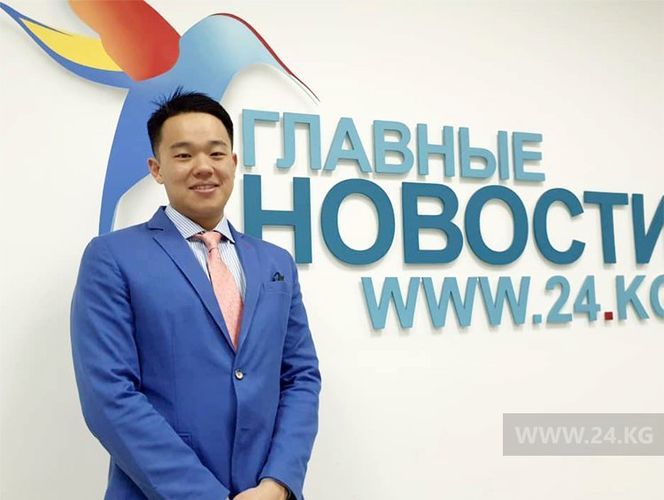 — Was it difficult for you to learn the Kyrgyz language?

— At first, it was a little difficult, because people spoke only Kyrgyz to me. In general, I have quickly learned the basic language for two months. Then I moved to a Kyrgyz family, this also served as an impetus for learning. I practice every day; I continue to learn Kyrgyz. I like it.

— Why did you choose Kyrgyzstan?

— I have always wanted to go to Central Asia, because I was very interested in this region. I like mountains, horses and water here.

— Where have you already been in Kyrgyzstan besides Naryn?

— I have visited Issyk-Kul. When I was in Jalal-Abad, I went to Sary-Chelek lake. I have been in Chui region, of course. I really liked the forests in Jalal-Abad. I plan to go to other regions. I would like to do this before I leave for my homeland.

— You live in a Kyrgyz family. Do you like their way of life?

— I like that the relations between members of a Kyrgyz family are very close. Everyone is trying to help each other. The Americans are different.

I am also surprised by the attitude towards friends. For example, in America, even if my friend is well received at my family, no one is particularly interested in him.

— What has disappointed you in close acquaintance with the local population?

— I did not have negative experience when interacting with Kyrgyzstanis. Perhaps, it is because I am a bit like a Kyrgyz.

— What national dish do you like in Kyrgyzstan, and what are you afraid to try?

— I’m not afraid to try anything, I eat everything now. I like manty, dymdama, samsy, plov. Your food is similar to Chinese cuisine. When I came here, I was surprised that the Kyrgyz eat sheep’s tongue and eyes. I like horse meat.

— What would you like to change in the region where you live?

— Kyrgyzstan is developing, and many tourists come here. Perhaps, the roads should be improved. If they are bad, people will not want to go to Naryn.

— Yes, sure. I plan to graduate and return here.

— Yes. The nature in my city is similar to Los Angeles, there are high mountains nearby. When I look at the mountains in Naryn, they remind me of my city.

— Do you have any difficulties in teaching Kyrgyz children English?

— I work in a team with three local teachers. We teach children English together. The kids are different, there are active children among them like elsewhere. In general, I have no difficulties.

link: https://24.kg/english/146518/
views: 937
Print
Related
Andrew Chen: Fines can be completely fabricated in Kyrgyzstan
USA to continue supporting democratic processes in Kyrgyzstan
Tristan Petterson: Some of my friends have asked me if I got to meet Borat
American Gary Shu fascinated by snow-capped peaks and Kyrgyz ballet
USA has highest coronavirus death toll in the world
U.S. citizens can fly out of Bishkek on April 12
Number of coronavirus cases in USA close to 400,000
USA to help Kyrgyz epidemiologists with training programs
USA to spend $ 2 trillion on support of economy due to coronavirus pandemic
U.S. and UK Ambassadors to Kyrgyzstan join #challenge20sec
Стоимость акций Центерры на бирже в Торонто (TSX)
на 05.06.2020
USD 9,22

28 more people get infected with coronavirus in Kyrgyzstan, 1,845 in total
News brief
5 June, Friday
17:36
President: Digitalization should improve quality of services in regions President: Digitalization should improve quality of ser...
17:09
Three Kyrgyz Temir Zholu employees suspected of fraud
16:41
Two million soms planned to be recovered from journalist Bayan Kulova
15:31
Free Economic Zone of Bishkek. Unfulfilled hopes of the economy
15:30
Over $ 300,000 transferred from Russia to Kyrgyzstan under fictitious contracts
13:56
At least 16,000 women give birth twice a year in Kyrgyzstan
13:32
Tourist season in Issyk-Kul region to become more active after June 20
13:21
Post-crisis government plan of Kyrgyzstan to be presented by end of June
13:10
Sergei Ponomarev: It is necessary to simplify tax administration
13:00
High risk of coronavirus infection observed in markets of Kyrgyzstan