Deon Badenhorst: We have an opportunity to extend life of Kumtor mine 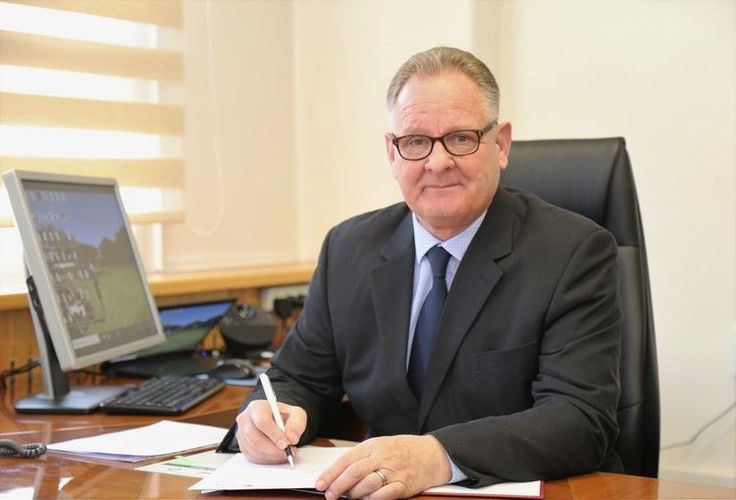 Kumtor Gold Company is a company in the mining industry, which seriously influences the economy of Kyrgyzstan and is one of the ten largest taxpayers in the country.

Not only Centerra’s shareholders, but also local residents and politicians watch closely what is happening at Kumtor mine. Despite the accident in December 2019, the enterprise fulfilled all its obligations to the republic.

Deon Badenhorst, President of Kumtor Gold Company, told 24.kg news agency in an interview how successful the year was for the company, what plans it has for 2020, and whether it is worth waiting for new projects from it, including in the field of environment and development of Issyk-Kul region.

— Last year was successful for both the company and the Kyrgyz economy, which received significant benefits from our contributions. In 2019, the company produced 18.7 tons of gold.

Payments in Kyrgyzstan, including mandatory taxes and dues, amounted to more than $ 366 million.

In total, over the period from 1994 to 2019, they exceeded $ 4,141 billion. The amount of capital investment in maintaining and development of production is over $ 2.6 billion.

The Strategic Agreement signed between the Government and Centerra entered into force in August 2019. It is based on environmental issues, health of the nation, social development of the regions and operational life of the mine.

If we sum up all the main additional payments, the benefit of Kyrgyzstan from the Strategic Agreement will be over $ 150 million. As of December 31, 2019, we have already paid over $ 74 million.

— What are the production plans for 2020? Did the accident in December last year affect them?

— After an almost two-month forced stop, mining at Kumtor resumed in January this year. Government of Kyrgyzstan approved the mining plan for the field for 2020 and issued all the necessary permits. We began to fully mine gold.

We are optimistic and believe that 2020 will be successful in terms of production indicators. We will focus on achieving stability after the tragic accident at the waste dump and will continue to create economic opportunities to extend the life of the mine. We have taken serious steps to improve the situation regarding labor safety at our world-class enterprise and we will continue to pay constant attention to issues related to the life and health of both full-time employees and all contract workers, no matter where they work.

— Centerra did not invest in exploration from 2012 to 2017 due to disagreements with the Kyrgyzstan’s government. After resolving controversial issues in 2017 and signing the Strategic Agreement, the company resumed research work in the territories adjacent to the mine. In 2018, the Board of Directors of Centerra approved a two-year exploration program, having allocated $ 24 million.

According to the plan, $ 20 million was allocated for exploration this year. This is a record amount even for us.

Exploration work is aimed at clarifying the potential of mineralization in the near-surface zone of the Central Pit, between the Central and South-Western Pits, and on the flanks of Sarytor site in order to increase resources for open pit mining and extend the life of the mine.

Preliminary exploration results allow us to optimistically look at the prospects for extending the life of Kumtor mine for several years.

— As far as we know, you decided to change the standard of fuel used at the mine to a more environmentally friendly one?

— Yes, as a responsible company, following all the requirements of the legislation and the Technical Regulations in force in the EAEU countries, we are switching to fuel and lubricants of a higher environmental class. Our experts are working on new purchase orders. This will take some time, since our fuel consumption is measured in thousands of tons and is one of the most important products that ensure the trouble free operation of the mine. Taking into account the importance of this issue in the context of preserving the environment, we will switch to fuel of a higher eco-friendly class in the near future.

— Will you support any environmental projects in 2020?

— Of course. As a large open-pit mine, Kumtor inevitably affects the environment. We adhere to our obligations to preserve natural biodiversity and reduce the negative impact of production on the environment and continue to work with non-governmental organizations and scientific institutions.

Kumtor Gold Company has allocated about $ 7.5 million in 2019 to analyze the state of the environment and measures to protect it.

— What projects on development of the region are your priority? Will there be any new ones in 2020?

— It is very important for the company that by the end of its operations all the projects and initiatives that we currently support can become independent, sustainable and bring profit to local budgets and the population of the region.

• Support of development of small and medium-sized businesses

— Creation of new jobs through opening of mini sewing workshops.

— Continuation of cooperation with JICA within One Village — One Product project

— Improvement of irrigation systems in Dzheti-Oguz and Ton districts.

— Training of young people and women;

— Launch of a project on promotion of energy-efficient green technologies and ensuring earthquake resistance of houses among local builders and individual developers;

— Purchase of a waste sorting line for a municipal enterprise in Balykchi city.

— Continuation of the project on access to drinking water.

In addition to supporting sustainable projects in the region, Kumtor Gold Company contributes 1 percent of its gross income to the Development Fund of Issyk-Kul Region. In 2019, the amount reached 592.5 million soms.