Lawyer of the former president of Kyrgyzstan Almazbek Atambayev, Zamir Zhooshev, was summoned to the Military Prosecutor’s Office. He himself told 24.kg news agency.

According to him, he received the summon today, but he will not be able to come there. 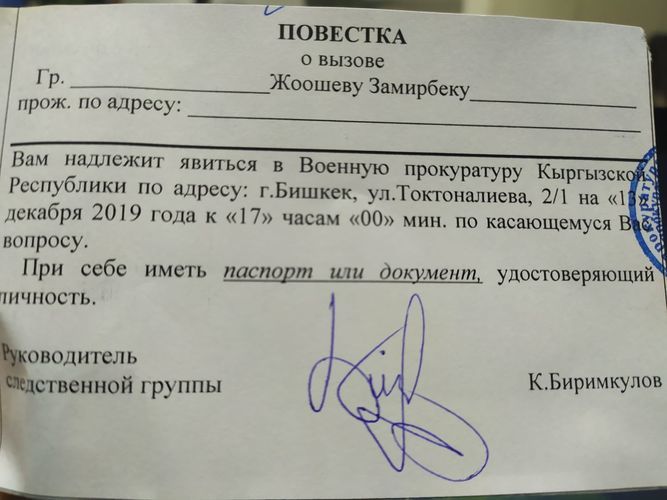 «I was called by 17.00, but I should be present at the Ministry of Internal Affairs on the case of Ravshan Jeenbekov at 16.00. The summon is incorrect. The investigators did not indicate on what issue, in what capacity and to what investigator they call me for interrogation. The document is signed by the head of the investigation team. In addition, the summon does not indicate contacts by which I could report that I could not come for interrogation. A lawyer may be questioned, if he witnessed a crime. I cannot be interrogated on the issue of my clients,» said Zamir Jooshev.

The lawyer noted that he cannot be forcibly brought to the supervisory body.

The ex-MP Ravshan Jeenbekov was detained after interrogation. Court will choose a preventive measure for him tomorrow.