A 33-year-old A.R. was detained on suspicion of illegal manufacture of drugs in Osh city. Press service of the State Drug Trafficking Control Service of Kyrgyzstan reported.

The police conducted a special operation and revealed a steady distribution channel of heroin on an especially large scale. 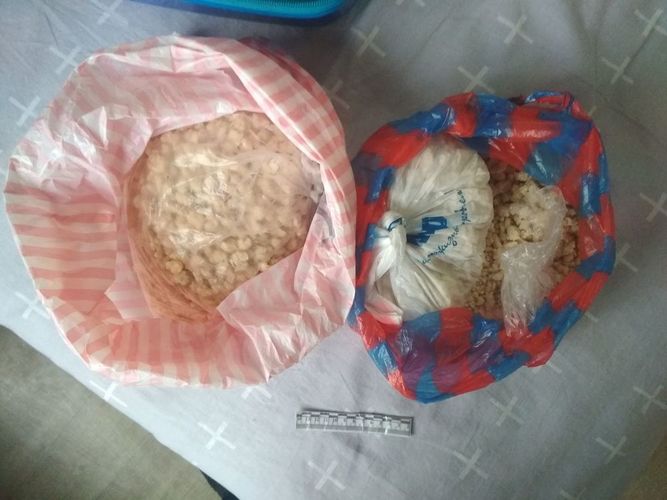 «On December 9, officers of the State Drug Trafficking Control Service discovered and seized a white substance with a specific smell of acetic anhydride during a search in one of the houses in Osh city. The fact was registered under the Article «Illegal manufacture of narcotic drugs, psychotropic substances and their analogues for sale» of the Criminal Code of the Kyrgyz Republic. The 33-year-old A.R was arrested on suspicion of committing the crime. He is registered with the Ministry of Internal Affairs as a member of an organized criminal group. According to conclusion of examination, the discovered and seized substance turned out to be heroin weighing 1 kilogram 870 grams,» the state service reported.
link: https://24.kg/english/137735/
views: 776
Print
Related
8 kg of hashish found in house of member of drug gang in Chui region
Over 5 kilograms of drugs confiscated from drug courier in Batken region
Ex-president of AUCA Andrew Kuchins to be deported from Kyrgyzstan
Former AUCA president Andrew Kuchins partially admits his guilt
Andrew Kuchins' wife tells why her husband ordered banned drugs
Man tries to sell almost two tonnes of sulfuric acid in Batken region
Sale of about 10 kilograms of hashish prevented in Jalal-Abad region
Local council deputy organizes drug trafficking channel in Kadamdzhai
Kyrgyzstani with heroin arrested in Odintsovo near Moscow
Kyrgyzstani detained with 40 kilograms of heroin in Kazakhstan
Popular