Automation of medical services will exclude corruption in medicine, legalize shadow payments and increase the transparency of the sphere as a whole. The President of Kyrgyzstan Sooronbai Jeenbekov stated during a visit to medical facilities.

The president got acquainted with introduction of digitalization in the field of medicine. He visited the National Center of Phthisiology and the Center of Emergency Medicine (CEM) in Bishkek.

At the National Center of Phthisiology, the head of the laboratory Gulmira Kalmanbetova told about the introduction of digitalization processes in the activities of the reference laboratory, which conducts rapid molecular tests for diagnosis of tuberculosis. 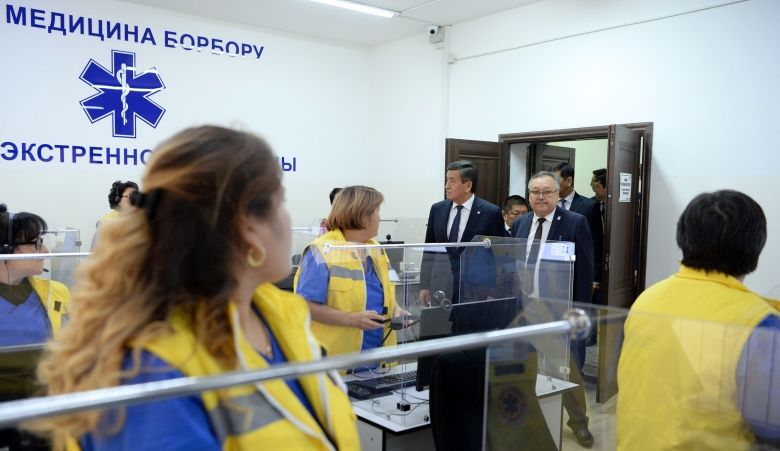 She told that a new system for transporting biological material by the courier service under the State Committee for Information Technologies and Communications was introduced.

«This allowed us to accelerate the process of diagnosis, reduce the risk of infection in other people, reduce the time and financial costs of the population. The indicated high-tech diagnostic methods are provided to citizens of the country absolutely free of charge,» the message says.

Sooronbai Jeenbekov examined ambulances at the Bishkek Emergency Medicine Center, the building in which the overhaul was carried out, got acquainted with the digitalization of the center. Its director Iskender Shayakhmetov said that in order to optimize and increase the efficiency of work of ambulance teams, a new automated control system has been introduced.

«When calls are received, location of ambulance crews is tracked online and the nearest free brigade is sent to the address. The status of the current actions of all teams is also displayed. Implementation of the project allowed to reduce the time of processing of applications for dispatchers (from receiving a call to a brigade’s departure), and to reduce the brigade’s travel time. This reduced the number of late servicing of the calls,» the presidential press service said.

Sooronbai Jeenbekov noted the special importance of accelerating the process of digitalization of medicine, including in the regions of the country. This, in his opinion, will improve the efficiency of provision of medical services to the population.

The President noted that the possibilities of increase of salaries for workers of the TB service and the ambulance were being considered.