Cakir Yapi Sanayi ve Ticaret A.S. is not an investor or donor, but only an intermediary in road construction in Kyrgyzstan," the State Service for Combating Economic Crimes stated to 24.kg news agency in response to a company’s appeal.

The state service reminded that all the executives of the company were outside the republic and were put on an interstate wanted list as suspected of committing a serious crime in the Kyrgyz Republic and outside the country. The Financial Police also commented on possible damage to the investment image of the republic in connection with the proceedings.

«The rules and conditions of the IDB and other international financial institutions provide for the right and duty of a beneficiary, which is Kyrgyzstan, to detect corruption, conspiracy with officials, fraud, forgery of documents both during tenders and during construction through authorized bodies,» the State Service for Combatting Economic Crimes said.

The state service denies any pressure on company’s lawyers. A letter from one of Nurbek Abdaliev’s lawyers regarding withdrawal of previously filed applications is provided as evidence. 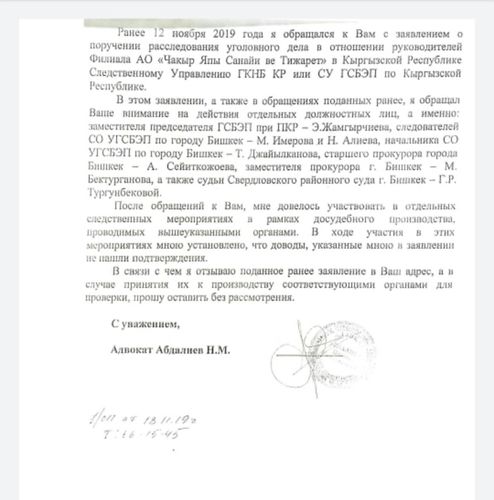 «The applications were withdrawn because the arguments indicated in them did not find confirmation. The lawyer publicly stated that there were no complaints against the investigating authorities. We consider such information as an attempt to evade statutory liability by releasing false and knowingly inaccurate data to the public,» the Financial police said.