Heart surgeon Mustafa Unal arrived in Kyrgyzstan at the invitation of a private medical center more than two years ago. He was born in Istanbul in family of a serviceman. He decided to become a doctor at the age of 15.

In the interview with 24.kg news agency, he told about the level of medicine in the republic and why the Kyrgyzstanis are happy. 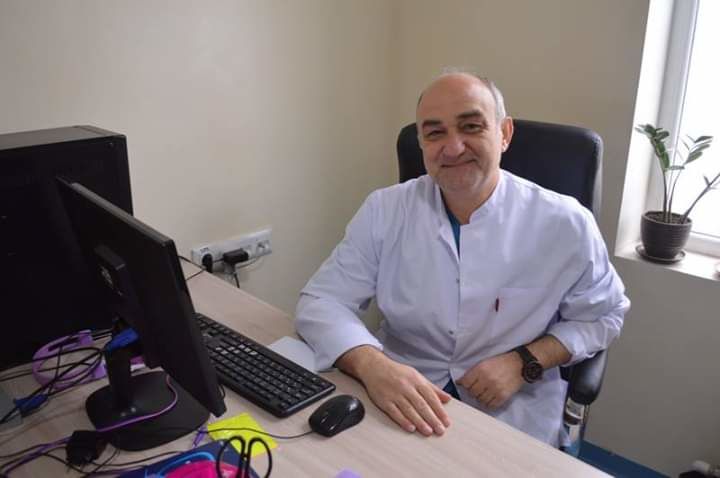 — As a teenager, I read a scientific article in one journal, which said that the heart was wrapped in a muscle from the back to increase pumping function, various techniques were discussed. It surprised me so much that I fell in love with medicine. I realized that there was still much to be developed in this direction. During the second year of my medical education, I decided to become a cardiovascular surgeon.

After graduation, I went abroad for internship three times: to Belgium, Italy, Poland, and had worked as a cardiac surgeon in Turkey for more than 20 years.

— Our family is prone to moving, we have no big obstacles to changing our place of residence. I received offers from Hungary, China, Bahrain and Kyrgyzstan at one time. I chose Bishkek, because it is also a Turkic-speaking country.

— Is your wife a doctor too?

— No, she is not. She worked in Turkey as a private entrepreneur. She has entered the Medical Academy in Kyrgyzstan.

— Did you hear something about Kyrgyzstan or Bishkek before coming to the country?

— Yes, I heard and read about Kyrgyzstan. It seemed to me that the people lived in yurts, drank mare’s milk, hunted with arrows like in the days of nomads. In reality, it turned out that Bishkek is a modern city, it is not far behind Istanbul, even higher culturally in something. It is unlikely that a woman will walk alone in Istanbul at night or in the evening. Women are more free here.

— What is your first impression of the country?

— I was impressed by the trees. They are planted evenly, an irrigation ditch runs in front of them, which supplies water.

There is no strong difference in living standards, quality of houses in the center of the capital and in the suburbs. In Turkey, you can immediately notice the difference when leaving the city.

— Is there something in Bishkek that reminds you of your hometown?

— Yes, I found a lot of similar points. There are no strong differences in culture, language. I don’t feel like a stranger here.

It seems to me that people in Kyrgyzstan are much happier than my fellow citizens. They are not caught up in something, in problems, they are more free.

— I have several of them, but not in the city. It is Chunkurchak, Ala-Archa. Nature is more touching, we are already tired of stores, shopping centers.

I would like to go to Issyk-Kul and Sary-Chelek. In the summer, when I had a vacation, my family went to Turkey, but I didn’t want to go somewhere alone.

— Is there something that you don’t like in Bishkek?

— It is spitting. You walk along a road and have to look for a clean place.

— Do you miss something in Bishkek?

— I’m a picky eater. At first, I was missing Turkish cuisine. There is a big difference in it here and in Turkey. At first, there were difficulties with acquisition of the necessary ingredients, but we have already found them. And the second point is the clothes. Their choice is much larger, and prices are lower in Turkey.

— What national dishes do you like, and what you will try in no case?

— Once the Turkic-speaking peoples, as we had at one time, did not have a wide variety of dishes. Inhabitants of Arab countries, the Greeks, the Georgians and other peoples brought their tastes and dishes to Turkey. They had a huge impact on Turkish cuisine.

This influence is less in your national cuisine, perhaps, something has come from Russian cuisine.

In Kyrgyzstan, I tried lagman, beshbarmak, plov, shashlyk, borsch for the first time. I did not like the last dish, but my children liked it. Their taste perception has not established yet, probably. I liked kazan-kebab, shashlyk.

I liked chalap very much. There is a similar drink in Turkey, but yours is tastier.

— I noticed when giving a toast the Kyrgyzstanis wish each other honor and respect, then health, and in third place — financial well-being.

I often ask Kyrgyzstanis what they would choose: $ 50,000 in cash or naming one of the streets in Bishkek after them. And to my surprise, no one chose the money.

Turkey is a capitalist state, people believe that if you have a lot of money, then you are happy. And your happiness is not measured in money. In our country, the majority would choose the first option.

Here is one more example. If you want to thank someone and ask: to give money or set the table, organize a party, 99 percent of Kyrgyzstanis will not agree to take the money.

And I like this trait, it turns out that humaneness is above material values here.

I have noticed one more difference. In Turkey, almost everyone has debts. Even if a person has a car made in 2010, he will take a loan to purchase a newer car. I didn’t notice this in Kyrgyzstan.

— You arrived at the invitation of a private clinic. Have you been in the state hospitals? What is the level of medicine in Kyrgyzstan in your opinion?

— Health care is a sector that requires a lot of funding. It is always an indicator of how well the state is doing.

Having come to one clinic in a republic, you can evaluate the country. I saw the state clinics; they correspond to the economic level of Kyrgyzstan.

I noticed that there are few motivating factors for professional growth of your doctors. Doctors, teachers are white-collar workers in Turkey, who make good money. And a person will strive to get into this segment of the population. Here I notice that the difference in the salary of a nurse and a doctor is 1,000 soms. It does not stimulate people much.

I would like to leave my mark in the history of Kyrgyzstan so that the people remember me well. Man’s greatest fear is not to die, but to be forgotten.