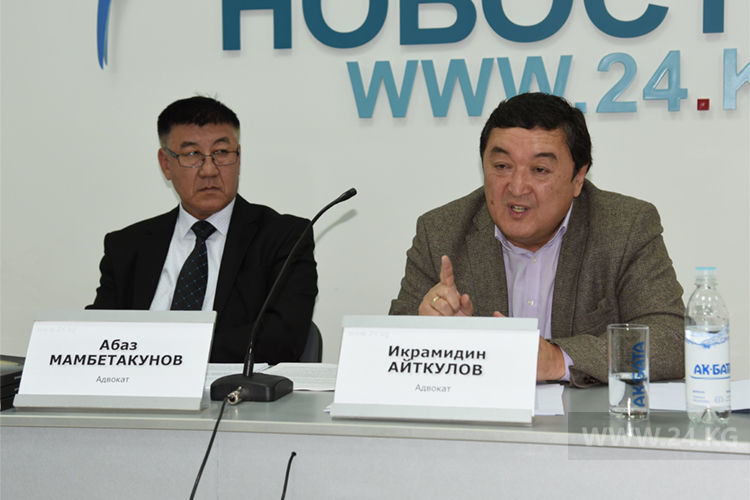 According to him, study of the circumstances of the case in the European Court showed that there was no impartiality. Therefore, the claim of the Kyrgyz side was denied. Kyrgyzstan may appeal the decision until September 19, 2019.

«Almaz Abekov should have been questioned in the spring. But it did not happen because of an investigator of the State Committee for National Security. The investigator denied presence of a lawyer during interrogation. In response, Almaz Abekov refused to testify. The court has taken these circumstances into account. We believe that the investigator behaved this way at the behest of his boss Sultan Toktogonov,» said Ikramidin Aitkulov.

The court decided that the official Kyrgyz authorities behaved dishonestly and were trying to mislead the European Court. They did not provide equal access to justice.

«The European Court found that a court in Kyrgyzstan was not an independent body. It depends on the president, because the head of state affirms a judge in office, and he dismisses them. In addition, former president Almazbek Atambayev has repeatedly stated that he personally controlled the case of Almaz Abekov. The court drew attention in its decision to the fact that Almazbek Atambayev was accused of corruption,» the lawyer stressed.

Former MegaCom adviser Almaz Abekov was sentenced to 25 years in prison with confiscation of property for economic crimes. He has to pay 91 million soms in favor of the mobile operator. The former head of CJSC Azamat Murzaliev was sentenced to 12 years, the director of Novostroy Service Aman uulu Kenzhebek — to eight years by the decision of the court, but he is already on parole.

In February 2019, the Supreme Court reviewed the criminal case of the ex-adviser to the head of Alfa Telecom CJSC (MegaCom trademark). The judicial board, chaired by a Judge Lepes Temirbekov, changed the sentence of the Bishkek City Court. Finally, Almaz Abekov was sentenced to 15 years in prison.

Border conflict: Rally takes place in Batken
News brief
17 January, Friday
17:59
Acceptance of payments for traffic violations suspended Acceptance of payments for traffic violations suspend...
16:58
School student suspected of raping 16-year-old girl in Tokmak
16:27
Aisuluu Tynybekova: I have a mind to make history for my country
16:11
Results of 2019. Economy of Kyrgyzstan continues to depend on gold
15:40
Events in Koi-Tash: What Farid Niyazov is accused of
15:27
Border conflict: Deputy Prime Minister Zhenish Razakov names betrayers
14:57
Power engineers’ case: Consideration of appeals to start at Bishkek City Court
14:50
All Bishkek theaters to go on tour to Russia
14:44
Kyrgyz-Chinese border to be closed for week
14:40
Mukhammedkaly Abylgaziev and Dmitry Medvedev talk over the phone