Roberto Merchan from Spain about boorsoks, tourist tales and love of Talas

Roberto Merchan from Spain is a full time traveler for the last 3 years and a half since March 2016, when he started his trip in South East Asia. The peculiarity of the trip is that Roberto travels by bicycle. He arrived in Kyrgyzstan in September 2017 and believes that cycling is the best way to explore the country.

— Roberto, tell us what do you do and how did you get the idea to travel by bicycle?

— Before that I was working in several countries (Poland, Denmark and England) as an immigrant due to the economic crisis that hit Spain in 2008, working in hospitality, customer service and IT companies despite being a physical education teacher for secondary school.

At first, I started backpacking and hitchhiking through Thailand, Cambodia, Myanmar, Laos, Vietnam, India, where I spent 6 months, and Nepal, where I was trekking around mountains.

After a summer visit to Spain in 2017, my way of traveling completely changed. With no previous experience, knowledge or even equipment, I decided to buy a bicycle and start bike touring from Bangkok through Asia with a main target: arrive to my village, Ardales, in the province of Malaga (Andalusia, South Spain).

I had a lot to learn about bicycles and this new way of moving around the world, learning always from people that surrounded me in the most difficult situations (punctures, breakdowns, cramps, etc.).

As an example, my first puncture was repaired by a Buddhist monk in Thailand, where I was sleeping in temples for nearly 30 days.

— How did you get to Kyrgyzstan?

— I came first time to Kyrgyzstan at the end of September from China, crossing from Kashgar to my first Central Asian country through Irkeshtam pass. It was a really special day for me, as I was looking forward to come to this country and explore the mountains and nature, plus I had the chance to enter the country on my birthday.

After just three days I crossed to Tajikistan, feeling I was too short in Kyrgyzstan.

But it was already getting cold in the mountains (-17 at night while sleeping in my tent after the border at Kyzyl Art pass). So I had to hurry a bit. That’s why, after a health break in Spain from February to June, I decided to come again to this beautiful country to discover it properly and enjoy it at its best, being already here for almost 50 days. I’m loving it!

At the moment, I’m documenting all my experiences through tales. I enjoy writing and sharing on my Facebook page.

— Have you heard of Kyrgyzstan before coming here?

— Yes, of course, I heard about it before.

Actually, I got really interested about coming here when Kimi, a French friend of mine I met in Nepal, told me she was coming to Kyrgyzstan after the trek. After that we kept in touch and she was always saying good things about this country, its culture, people. So, when I started cycling in Thailand back in September 2017, I already knew I had to come to Central Asia and more precisely to Kyrgyzstan to discover its wonders.

— First impression was really good. It was exactly what I was looking for at that time: wildness, nature, mountains... and in such special date as my birthday. No doubt, it was one of the happiest days of my life.

I was enjoying it alone while cycling among snowcapped mountains. Astonishing how beautiful that was, leaving me open-mouthed the whole time.

And this impression has remained the same as I’ve kept cycling in those crazy ‘roads’ and learning about its interesting culture with the nomadic component of it, and the recent and interesting history.

— What surprised you in Bishkek and Kyrgyzstan?
­

— The amount of luxury cars and shopping malls In Bishkek really surprised me in comparison with the simple life at the country side. Such a dichotomy!

Also when I started reading about the history, I realized how little do we, Western people, know about the countries in Central Asia, and how recent the history is in here with the two revolutions happening just 9 and 14 years ago.

I was also surprised by the amount of vodka that guys drink here, especially in the countryside, where in the small ‘magazines’ (stores) you will find lots of brands of vodka, but not much more. 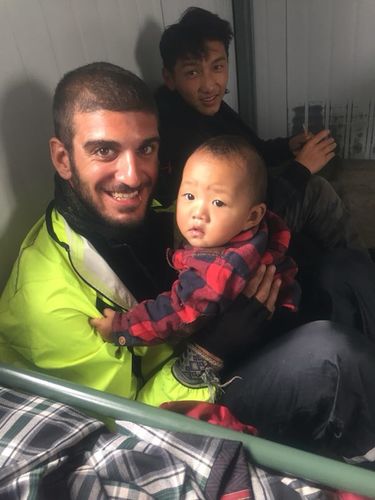 — Few of them, if I start thinking about it. For instance, that time when a fox tried to steal food while I was sleeping out in the open without tent, or when I was staying with a local family in a yurt on the way down from Kaldamo pass.

They were really curious about me writing in Spanish in my diary, and really surprised that I tried to clear the table and wash the dishes right after they invited me for dinner. Such a normal thing for us, but they found it really funny.

Another anecdote occurred when I met a man from Bishkek in the mountains on the way to Son-Kul. The locals invited us for vodka and shashlyk, and then I encountered him waiting for a bus on the side of a main street in the southern part of Bishkek. We both were so happy to see each other again and exchanged some hugs. What a coincidence!

— Not much, as Malaga (Spain) is quite different from the post-soviet countries, but I can say that many things, including Kyrgyz cuisine reminds me of the Polish cuisine, where I used to live for few years.

Although, there is one thing that is really similar to something my grandmother Carmen from the village used to prepared for us on weekends: boorsoks.

It is amazing to see how some stuff can be still quite the same so many kilometers away! At the end, we are not so different.

— Better roads, as my fully loaded bicycle struggles, sometimes, to go on those bumpy off roads, but on the other side, I love it! Also I miss the car drivers being a little more relaxed while driving on that kind of roads and in the city. They seem a bit nervous sometimes, and would not stop honking. Maybe a bicycle lane would be the solution?

— What is your favorite place in Kyrgyzstan?

— I really like Talas, where I spent a week with the family of my good friend Nurzhigit, and where I learned a lot about the Kyrgyz culture, habits, religion, cuisine, and helped in the daily chores, such as digging a hole for an outdoor toilet (not common at all in our country) or collecting the dry excrements from animals to use it later for cooking instead of coal.

Besides Talas region...Not so easy to choose a favorite place, but, maybe, it would be Moldo-Ashuu pass on the way up to Son-Kul from the southern side, and, probably, the way down from the difficult Kegety pass, even though I really struggled on the way up where and got caught by rain and a hail storm. It is definitely one of the most difficult things I have done in my life.

But, generally, I love the changing landscape in this country: from deserts and dry mountains to green pastures around a lake, and Swiss alpine trees along endless gorges and crystal clear rivers.

Above that is the amount of wild horses, cows, sheep and different animals in this country. It feels great to feel the nature so close to you while cycling around. Insane!

— Honestly, I could be eating plov every single day, but I really enjoyed manty, oromo, kuurdak and, of course, the shaurma sold all around the city. Even though it’s fast food, but it is really good.

Furthermore, I love eating meat, so I think Kyrgyzstan is a good place to enjoy good beef and sheep, sometimes even just by the side of the road when getting invited to picnic with families.

I even got the chance to try the popular beshbarmak (‘five fingers’) at my friend’s house and enjoy ashlyan- fu in Issyk-Kul region, which reminded me of my stay in China.

— What are you afraid to even try?

— Nothing really, I even tasted horse meat for the first time after seeing the whole slaughtering ceremony in the same morning. I really liked it!

But I need to admit I don’t like kurut, even though I wasn’t afraid of tasting it, not after having tried insects with the minorities in Southern China (Yunnan province) or in Cambodia.

— They love to enjoy time with foreigners and show the best of their country, being really welcoming and helpful most of the times, even though that would mean to reply always to the same questions: «What’s your name? How old are you? Are you married? Do you have kids? Do you travel alone?»

To what I would reply that yes, I’m traveling alone from Malaysia for already 9,000 km and that my bicycle (Carmela) is my only and unique wife. Laugh is coming always straight after this kind of answer as they don’t expect it, with really surprised faces when they hear the story.

For me, it has been great that I know a little bit of Polish, Czech and Serbian in order to get closer to locals in a kind of Russian (actually mixing some words from one of the above mentioned languages and trying to learn every day new ones), especially when in other parts of Asia, such as China or Vietnam, I could barely interact with them, which means I could learn less about their culture. 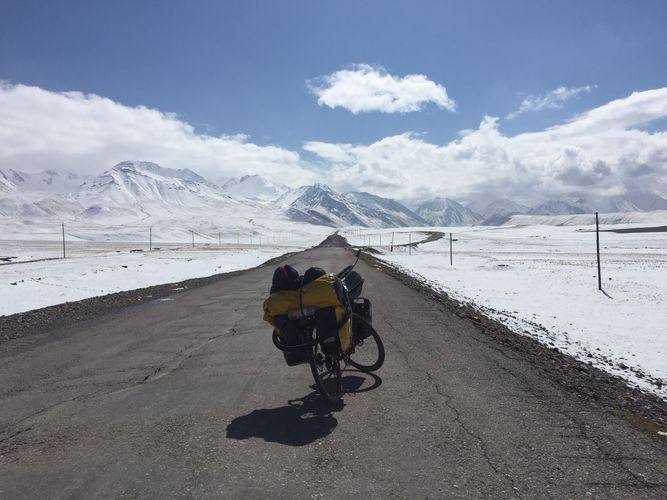 I really appreciate the effort the locals have done to understand me and how curious they were when they were meeting me and seeing that I could understand a bit of what they were saying.

What disappointed me...Hard to say, but probably it would be the way people drink in this country and how they become a bit aggressive sometimes when driving.

— Of course it is!! I wouldn’t hesitate about it even for a second, but next time with a light bike to make it easier in the mountain passes. There are so many wild places still to discover from my side.

Nevertheless, now it’s time to keep cycling towards Uzbekistan, Turkmenistan and Iran on my way to Spain.

I still think that cycle touring is the best way to discover the world and the local cultures, which is probably the main point why I do it that way.

I would highly recommend everyone to come to Kyrgyzstan and cycle around in order to really immerse themselves into the culture.